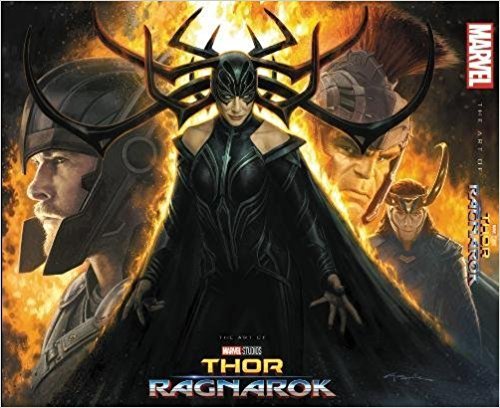 The Thor: Ragnorak artbook is another fantastic addition to the Marvel movie artbooks. Just like other Marvel movie artbooks before, this is a large hardcover that comes with a slipcase. There are 328 pages instead of the 240 pages that's mentioned on Amazon. This is a really thick book.

This book is more colourful than the other artbooks, and if you've watched the movie you'll also realised that the movie is also different in visual style and of course the mood.

The bulk of this book is filled with character designs with the occasional scene paintings and environment art. There's just so much character art that sometimes I wish they could have included more, well, other art. That could be a good or bad thing depending on what you're expecting.

The character art is great. There are lots of designs and iteration to look at. We have Thor, Hulk, Hela, Loki, Odin, Surtur, the fire dragon, Fenris, Skurge, Einherjar, inhabitants of Sakaar, The Grandmaster, Miek, Hiemdall, Valkryie and many of the minions. It's quite amazing just how many other characters there are, other than the main characters played by actors.

Second half of the book focuses on the colourful work of Sakaar. Again there's more character art, and we get to see Thor and Hulk's new costumes. There are also quite a few environment art for Sakaar which looks really cool and unlike other sci-fi cities, even from Star Wars. Sakaar definitely has its own flavour.

The quality of the concept art is pretty good and a joy to look at.

The book is pricey but for fans of Marvel, the movie, or concept artists, I think it's still quite worth the money. If have been collecting Marvel movie artbooks, you should not miss this one.