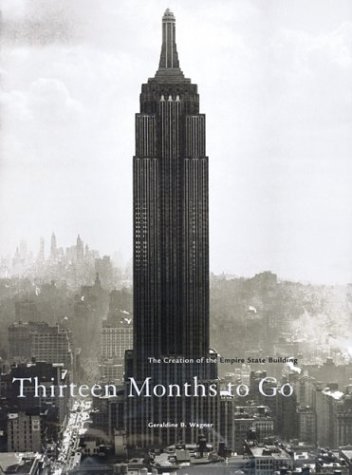 This should have been a dream book about one of New York's finest. A large page size and a wealth of available photos and graphics but I think it turned to be a remarkably dull title, especially visually (which probably explains why copies can be picked for next to nothing).

The editorial seems to be just too broad. The first two chapters (over sixty-nine pages) give a history of the Twenties and the people involved in creating the masterpiece. The next two chapters cover the construction and I think that's the interesting part but this is summed up in sixty-three pages. Because there are plenty of large photos the text on this aspect is rather short. The last chapter is a cut and paste job of trivia about the Empire State (including the predictable listing of dimensions, cost, man-hours worked et cetera) including a reproduction of the New York Post front page splash EXTRA Bomber hits Empire State Blg. Movie stills, lyrics to a song and WTC on fire in September 2001 also get a look in.

Lewis Hine's stunning photos of the construction rightly get a good showing but annoyingly, like most of the photos throughout the book they are handled in a very amateurish way. There seems no criteria worked out to get the best use of photos so they end up different sizes with excessive amounts of white page space everywhere.

'Thirteen months to go' is a third-rate effort when compared to Building the Empire State. An amazing book that reproduces the typewritten notes by one of Starrett Brothers and Eken staff who meticulously detailed the construction, it also includes photos. The Portraits of America: Empire State Building: The Museum of the City of New York is a smallish paperback but in 128 pages manages to cover it all, just like 'Thirteen months...' but in a much more concise and interesting way.

Incidentally this book: Unbuilding, aimed at young adults is a fascinating visual description of taking the Empire State down using the drawings of David Macauley.

Thirteen Months to Go: The Creation of the Empire State Building is available at Amazon (US | CA | UK | DE | FR | IT | ES | JP | CN) and Book Depository

Two other books that are so much better than 'Thirteen months to go'.