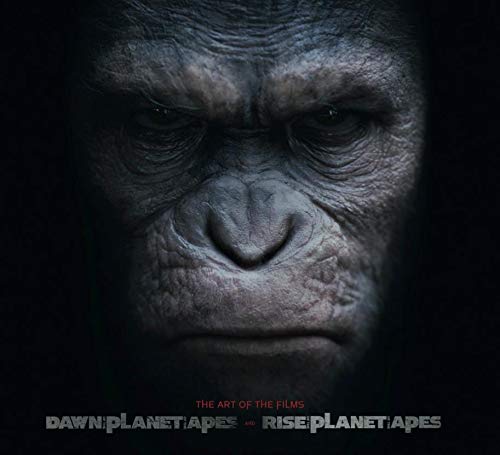 It's nice that there's an artbook for the two Planet of the Apes films. I was really thrilled and blown away by them, especially for Dawn.

This is a large format hardcover artbook with 176 pages. The cover has a nice fine grainy texture and the print of Cesar's face is actually glossy. I'm just amazed at how real Cesar looks, even though you know it's just computer graphics.

The content is split between the first and second films, more on the second one. Pictures are a mixture of photographs from behind the scenes, the sets and concept art. There is a lot to see and it provides a nice general idea of how the films were created. The accompanying commentary that talks about film production, covering the sets and scenes in the order as they appear in the films.

In terms of concept art, many pieces are of the environment, such as Gen Sys building, Will's home, primate shelter and San Francisco. The art is quite well done. Many I suspect are paintings over 3D models but they look great because of the details and lighting. There aren't much character designs except for a two page spread for the main apes with more screen time.

The set photographs are fantastic. It's fun to find out which sets are real and which are digital. There's just the right amount of photos of actors in their motion capture suits. I left the cinema wondering if director Matt Reeves had casted mutant apes because the acting is just unbelievable. You'll read quite a bit on the performance motion capture.

This is a fantastic artbook with a good mix of art, photos and writeup. I particularly enjoy the insight from commentary.

That's the glossy print on the cover reflecting light