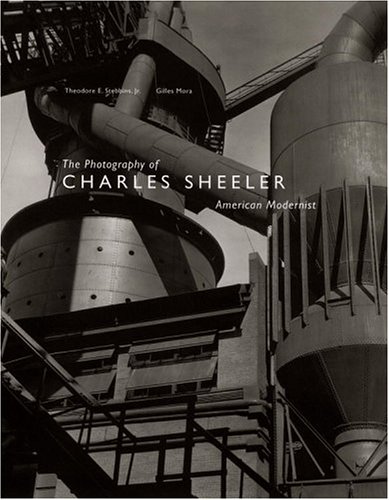 I had always thought of Charles Sheeler as a painter of industrial landscapes rather than a photographer until I looked through this book. Now I think he was creative in both mediums. As the title suggests this is about his photography and though there are examples of his paintings, mostly to illustrate the three essays, they are in black and white. Sheeler was experimenting with photography and painting before 1920. The book has photo sections devoted to his Doylestown house (near Philadelphia) African sculpture and a few clothed and nude studies of his wife Katharine.

Sheeler visited Europe in 1929 and an important part of this trip was to photograph Chartres Cathedral, he called it "...one of the outstanding experiences of a life-time". The book includes thirteen beautiful shots of the Cathedral and they look remarkably like his photos of the Ford Motor Rouge River blast furnaces and other exterior bits of the industrial plant which he took in 1927.

After 1929 Sheeler concentrated on his paintings. The photos in the book for this period: 1929 to 1939, include house interiors and several for his Power series. One of these, the wheels of a Hudson steam loco was the basis of his famous super realist 1939 painting 'Rolling Power'.

The images in the book are taken from Lane Collection, of the Museum of Fine Art, Boston, who own the Sheeler photographic estate and the book was originally published in conjunction with exhibitions in 2003/4. The 190 photos are printed as tritones with a 250 screen and they look a treat on the page. The design of the book is first class as is the text, especially the essay by photo historian Gilles Mora. Oddly there is no index.

I thought this was an excellent monograph about Charles Sheeler's photography. A side of his creativity that is not so well known as his industrial landscape paintings.

The Photography of Charles Sheeler: American Modernist is available at Amazon (US | CA | UK | DE | FR | IT | ES | JP | CN) and Book Depository

Spread from the illustrated essay by Gilles Mora.

Spread from the illustrated essay by Karen Haas.

Industrial strength or Chartre Cathedral (1929) sheeler has a unique way of seeing structures.