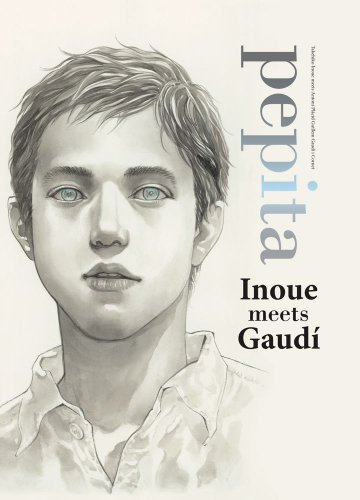 I've had the Japanese edition of this book pepita 井上雄彦 meets ガウディ that was published in 2011. I like the book but could not understand what was written. It's great that Viz Media released this English edition. There's some difference between the two edition. The English edition left out the behind-the-scenes DVD and some calendar postcards.

Pepita is a sort of a travelogue sketchbook from Takehiko Inoue, the artist for the popular comic series Slam Dunk and Vagabond. Pepita is a very different piece of work from Inoue who is known for manga art.

In 2011, he traveled to Barcelona in Spain to look for inspiration and meaning in Spanish Catalan architect Antoni Gaudi's architecture. Collected within are the sketches, photographs and notes that he made on the trip. It's written very candidly and you can read about the thoughts he had when looking and drawing the different places.

He visited the mountains at Montserrat, places were Gaudi lived, and the many sites where the famous buildings are, such as Sagrada Familia, Casa MIla, Park Guell and many more. If you've never seen these places before, you might be filled with a sense of wonder after looking at the designs. The buildings are very organic and is very much influenced by nature. You can't even describe them as European looking because they are something else.

Inspired by the mosaic tiles that Gaudi used occasionally, Takehiko Inoue uses that as a design element for his art in the book. He also has sketches drawn over photographs and portrait sketches of how Gaudi and his family and friends would look like.

There's also plenty of interesting information about Gaudi in the book. The name of the book is actually the name of the woman Gaudi loved. Gaudi scholars were interviewed and provided many insights to the life and career of Gaudi. A list of Gaudi's structures is included.

Recommended to fans of Inoue and those who like travel sketchbooks.

English edition left out the DVD.

Inoue sensi can see things many artist are not able to, I admire him so much, not just for his art which is remarkably good, but also for the stories and messages he send behind them.

Thanks for the review, great book as always!