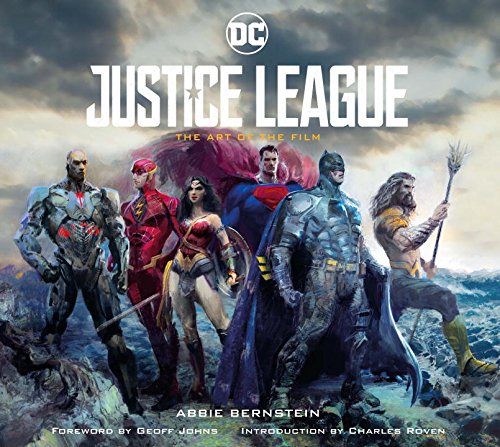 This is a decent movie artbook companion but it certainly could be better. If you also collect the movie artbooks from Marvel, just note that this isn't as good.

As an artbook, it has quite a substantial amount of film stills and behind-the-scene photography. I don't mind film stills or photos if they are done well, but in this case, I felt that some were either blown up too bit or used too small, or they show a different view of the subject but are not showing anything different (hence unnecessary).

The concept artworks are nice enough and you can get to see lots of details, especially on the main character costumes. There are also plenty of shots for interiors of locations, such as in the Bat Cave, where Diana works, and also of Knightcrawler, Flying Fox and the Batmobile. The scene paintings have a very noticeable digital paint-over look. The set and costume designs are great.

There isn't much text in the book except for the few quotes by the actors and a few crew. There was nothing from director Zack Snyder or Joss Whedon who took over post-production. And the text don't really add a lot to help you understand how the film was made, or the story or character motivation. And they have this weird unnecessary design of a large star icon which just looks out of place above all the quotes.

This artbook is a mixed bag for me, but still a positive mixed bag though. There are times I would actually prefer more film stills instead, or more behind-the-scenes photography, if they are shot and done well. I probably won't mind if this is a 100% photography book. The mishmash of styles doesn't quite work for me. And... the cover art is not great. Anyway, the page previews are below, check them out yourself. Maybe it's just a personal preference.

The movie poster with the Alex Ross lighting was terrific. I really wished that had been the art direction for the film instead.