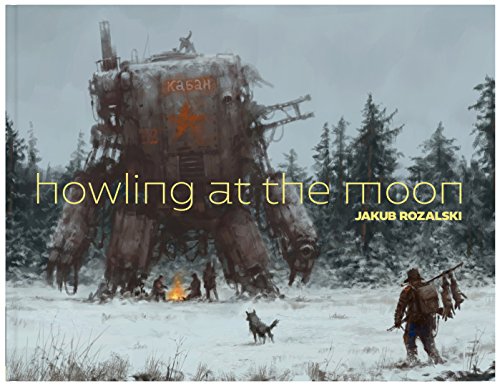 Special thanks to Jakub Rozalski for sending me this early preview copy of his latest artbook that's called Howling at the Moon.

This is a large wide format hardcover artbook with 160 pages.

The book is split into different chapters and the paintings in each are based on a certain premise, some sort of alternate universe. There isn't a lot of text except for the introduction that explains the world in each chapter. When you look at the paintings, your mind will probably start to imagine and make up stories about what's happening in those scenes. And that is what makes the paintings in this book powerful. They speak and tell stories visually.

The first chapter has a theme of samurai, vikings and David vs Goliath mixed together. The first painting shows a samurai on a beach that feels very similar to the WWII Normandy Beach landings. In the background in less detail is a huge giant dragging a long hand weapon. It's ominous. We don't know what's going to happen later but we know the fight is going to be very tough, even impossible. Meanwhile, there are seagulls everywhere, oblivious to the danger. This chapter also has several other sea giants.

The second chapter has almost 80 pages and features paintings that features an alternate Europe, one enveloped in war in 1920. The twist is instead of tanks and planes, we have giant walking mechas. Basically, imagine the both World Wars but swap all the war machines we know of for mechas. Just like in many war films and photos we've see, the mood is very somber. There are villagers going about their daily chores and soldiers and machines are marching pass their homes.

The third chapter is also linked to war. This time the enemies are giant skeleton or Terminator-like robots that wield machine guns.

I've already said too much. I won't spoil the surprise for the last two chapters. The last few pages feature tutorials on how he paints.

The paintings are really good, the type that you can hang on your wall if you don't mind the war theme and the sombreness. Every painting has a story and invites you to imagine what's going on.

This is no doubt going to be one of 2018's best artbooks. Highly recommended.

And if you like this book, be sure to check out Simon Stalenhag's Things from the Flood and Tales from the Loop too.

Just for your info ;)
The second chapter you are talking about, is the artwork for the boardgame Scythe.

Hi Parka, not sure if you know but the art from this book is the same as the art from a Board game call Scythe. The game was released to critical acclaim and is one of the TOP rated on boardgamegeek.

@Demian and Zewen
Thanks for the info. I didn't know that.

There is also a RTS computer game called Iron Harvest coming out this year that's based on this art work .. I was hoping to add this to my Simon Stålenhag collection cos the art work looks quite similar but I don't think the art work here (from what I can see) equates to his innocence of child hood imagination with sinister undertones .... Great review BTW Still may have to take a look :D

Teoh, i've been following your blog for many years and have always taken your opinions to heart. On this thou I must disagree, his stuff is nice if monotonous, but the biggest issue I have with Jakub is his lack of acknowledgment to his sources and his dishonesty regarding his technique. If you want to know more about what i'm referring to, just read this link here: https://www.reddit.com/r/conceptart/comments/853k2g/the_truth_behind_the...

Jakub has been caught tracing copyrighted photos and other art without giving any credit to the origina artists. There´s several post covering it and the evidence keeps growing. What maybe worse is that his tutorials are made up to look as if he´s doing everything freehand when in fact all he´s doing is painting on top of photos.