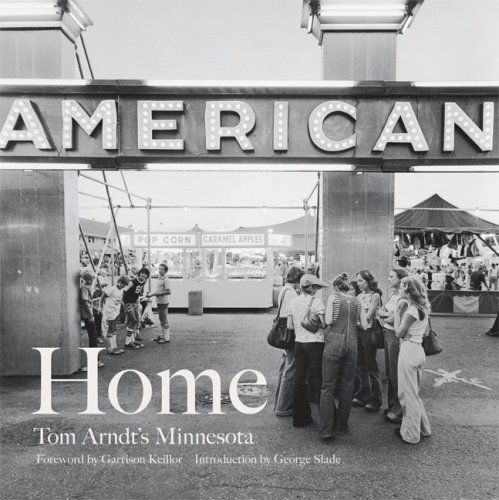 The heart of Minnesota

When I glanced at a thumbnail of the book's cover photo I immediately thought of those remarkable FSA ones from the Thirties, maybe it was a shot by Walker Evans or Russel Lee or Dorothea Lange. Finding a larger cover revealed that it must have been taken in the last few decades (actually 1976) and then I saw that it was taken by Tom Arndt. Not all the photos in the book come up to the quality of the cover image but most do though I have to say that there are some that I thought, with a more rigorous selection, could have been left out.

The 157 plates follow a rough sequence of: fairs; street scenes; parades; bikes; circus, agriculture; diners; old folks and sport. They were taken between 1967 and 2007. Street scenes have the largest selection with thirty-six, mostly in Minneapolis and St Paul. Another book that I've enjoyed of these cities is Mike Melman's The Quiet Hours: City Photographs, seventy-five photos that really do live up to the book's title. They were taken just before dawn of empty streets and the insides of buildings. The Uni of Minnesota Press also published this book.

In 'Home' some of the photos pull you right into the frame. Plate forty-seven of parade watchers sitting and standing on the sidewalk is just beautiful. The sort of scene Norman Rockwell might have painted for a Post cover. Plates 113, 114 and 115 create wonderful mosaics of interior and exteriors of shops just by using reflections in their windows.

On the other hand there are a few in the book that I thought definitely lacked creative sparkle. Plate eight shows a ticket seller in a booth filling half the photo with a large expanse of white wall, some motorbikes and the back of a car fill up the rest of the frame with an out of focus something lower right. Unfortunately this is opposite a perfect composition of a pop-corn seller in a truck looking out the back window. On either side, in the distance there is activity and detail. This image does everything you expect a photo to do, where as the one facing it seems to do everything a photo shouldn't do. A mere snap the book could well do without. (I've uploaded this spread from the book). The few other photos that I thought rather weak had dull compositions and no obvious focal point, events that weren't really worth covering (plates fifty-eight and nine) and buildings that lacked uprights (plate twenty-seven and 104).

The book is a large square format, ideal to show off Arndt's work and there are some spreads where the photos are square with a half-inch margin all round, these spreads look just perfect and I thought it was a pity that the whole book wasn't like this (a format that Lee Freidlander has used in his books). More than half the photos are either landscape or upright on the page and strangely some have a thickish black border and others not. They are 175 screen duotones printed on an excellent matt art paper. A really nice touch, in the back pages, are the photographer's thoughts and details about seventy-seven of the photos, illustrated with large thumbnails. The plates all have a single line caption but someone at the publishers had the silly idea of grouping up to three together on a page which requires the reader to try and work out what caption applies to what photo by flipping the pages back and forth.

Tom Arndt's 'Home' delivers a wonderful slice Minnesota life from the recent past and it's almost the perfect photo book.

The first photo in the book and what a winner.

A pity all the photos in the book weren't this square format. They look just right with the half inch margin.

I wonder why these were included, not much better than phone snaps.

Left: great composition and looks just right as a square photo on the page. Right: this has a big nothing in the center with the focal area pulling either side.

Two photos, the right seems just perfect, the left could well have been left out of the book.