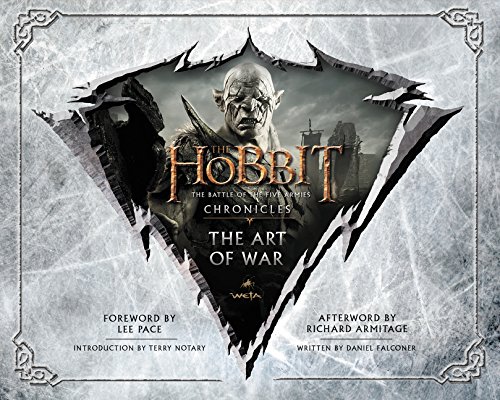 First thing to note is there are two publishers for this book. One's Harper Design and the other's HarperCollins. They should be related. Anyway, there's some price difference depending on where you buy the book from.

This is the sixth and final Chronicles book for the Hobbit films. Just the the earlier Hobbit movie companion books that I've featured, this is presented in the same hardcover format. The cover treatment is actually quite nice with the icy look and frosted texture that you can touch (without feeling cold of course). There are 258 pages unlike what's listed on some websites.

It's packed with content. There are lots of pictures, artworks and in-depth commentary. The content is arranged in chronological order but there are also some sections like armour where they are group together, or costumes or weapons.

The book starts with the burning of Lake-Town. It shows the set of the town, the props and how the houses are made. It talks about the fire from Smaug and how that was created digitally. It also has the stunts actors have to do. Basically, it's a detailed breakdown of filming process including the construction of the set. Other major scenes also have the same level of detail coverage.

In addition to the text, there are the wonderful accompanying pictures of the characters, creatures, costumes, concept art, props, armour, weapons, behind the scenes photos and some film stills. These are high resolution pictures and there are also close up so you can see the rust and textures on the metallic armour or even the silver strand of hair of Thranduil.

I've said many positive things about the earlier Chronicles and the same applies here. It's a fantastic book, the definitive companion for the film.