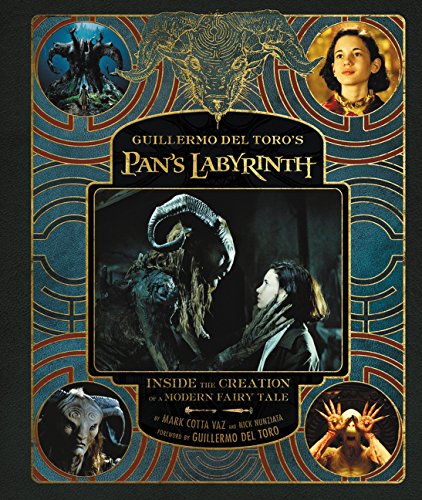 Pan's Labyrinth is one of my favourite films of all time. I remember being mesmerised by film when I first watched it. This companion book put to words just how amazing the film was.

You can think of this book as an anniversary tribute as the film was released 10 years ago.

The book's written by Mark Cotta Vaz, an author whom I've come to associate with writing movie books with depth. This book talks in detail about the film production. You'll read about how the film was financed, casting, the politics of film making, creating the story, props, and shooting on location.

This book let's you know how Guillermo del Toro think, direct and work with people. The making of the film was fraught with difficulties such as handling the budget and politics. It's inspiring to read about how the whole team persevered and made the film. This 160-page hardcover is filled with lots of interesting stories.

In addition to the wonderful text, there are also many behind-the-scene photos, film stills, concept art and storyboards. Of particular interest to me are the photos and explanation on how they made all the creatures in the movie. It's like reading about how magicians do their tricks. The storyboards are awesome as they perfectly illustrate selected key moments.

Overall, it's an excellent companion that I can easily recommend to any fan of the film. There's so much to know about this film. This book should delight any film buff.

Guillermo del Toro's Pan's Labyrinth: Inside the Creation of a Modern Fairy Tale is available at Amazon (US | CA | UK | DE | FR | IT | ES | JP | CN) and Book Depository

Hey Teoh,
I've been following your blog for a long, long time... and I wanted to thank you for creating Parka! After I discovered the Pan's Labyrinth book and the Art of Mad Max: Fury Road (when you'd originally posted about them), I finally got them last week from Amazon.in, since I'm from India. Unfortunately, there's no affiliate link to Amazon.in for these books (or any of the others, I think)... and I was wondering if you could add this link too, so that the next time I get an art book etc. based on your recommendation/ review, I can show support for you too, in my own small way. What you do here at Parka is amazing... thank you, again... and keep up the good work! :) Pratheek

@pratheek
Thanks. I don't have many readers from India so I did not add Amazon India links. You can compare the prices with Book Depository (shipping included) and if it's cheaper there, you can get it from Book Depository affiliate links.