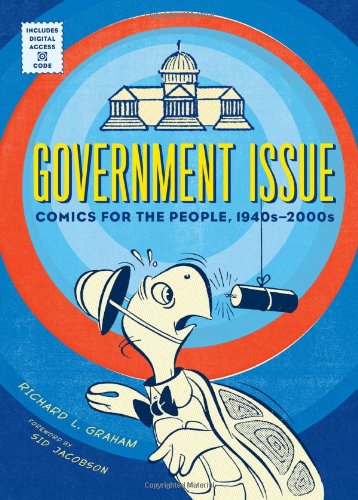 Considering the huge readership, over the decades, of Sunday newspaper comic supplements the use of the format would seem the obvious choice by Federal and State agencies to reach the largest possible audience. Richard Graham in the four chapters: Ready then, ready now (military); Show me the money (employment, economics); Be prepared (Civil defense, health and safety); The American way (Landscape, lifestyles) presents an amazingly wide range of non-commercial comics in these pages.

Predictably the Pentagon produced the largest number of comics and what better way to get essential information about equipment to the military. Will Eisner did it for years with his brilliant PS Magazine. Lifestyles get a look-in on page eighty-two with eight pages selected from `Dignity & Respect: A training guide on homosexual conduct policy'. Put out by the Manpower and Reserve Affairs department in 2001 and withdrawn on orders from President Bush. The military commitment to comics seems as strong as ever, in 2010 the Naval Health Research Center published a 200 page graphic novel: 'The docs', about combat stress during Operation Iraqi Freedom.

Apart from the Pentagon comics were published (and included in the book) by a whole rage of agencies, for example: Departments of Education; Treasury; Justice; FBI; FDA; HEW; Federal Reserve Bank; National Parks Service and plenty of State ones, including the California Department of Corrections.

What surprised me while reading the book was the number of well known artists whose work is here, I've already mentioned Will Eisner but there is art from Al Capp, Milton Caniff, Chic Young, Walt Kelly, Dan DeCarlo, Jack Sparling, Angelo Torres, Joe Orlando and Joe Kuburt to mention a few. Comic book publishers like Marvel, DC or Kitchen Sink realized their expertise could pull in an extra revenue stream by producing material for government or state agencies.

The book is the usual quality I expect from Abrams Comicarts though I thought some of the comics could have been a bit larger on the page, the margins are rather generous here and there. A nice touch is the reproduction, with many examples, of the complete story, others have just a cover and a sample page. Everything is captioned with publisher, date and where known artist and writer.

Author Graham has revealed some fascinating comics from a market that has been neglected until now.

Thanks for the kind words! I'd like to also make you aware that the comics collected in Gov. Issue, as well as many more from other countries, are available as free pdf files at: https://comics.unl.edu Cheers! rg