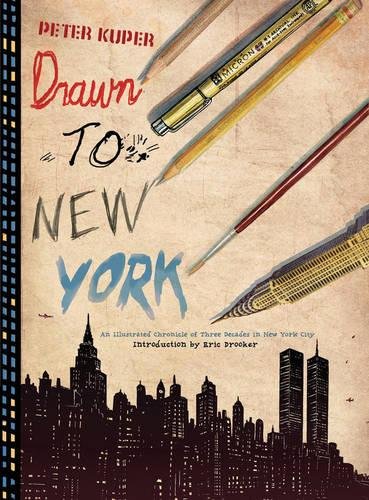 Peter Kuper has lived in New York since 1977. He's the guy who drew "Spy vs Spy" for MAD magazine.

Drawn to New York is a collection of sketches, illustrations and comics about the city he was attracted to when he first visited it in 1968.

The sketches are of observations and his interpretation of the city, the streets and its people. Sometimes drawn in just ink, other times with colour pencils and watercolour. Occasionally, you see a receipt or photo taped to his sketchbooks. He uses many different medium.

There are several short comics included. Some are his adventurous in the city, such as climbing up the Brooklyn Bridge in 1981. Most are fictional and wildly imaginative, while at the same time inspired by the city. Some depict the economic situations, others reflect on the lives of people. There's also one for September 11. He's a good storyteller and the comics show.

Also included are some editorial art he did for publications such as Time, New York Times, etc. Many of his illustrations, not just the editorial ones, feel quite editorial, if you know what I mean.

He has a nice casual style that manages to capture the vibe of the city. Even though that casual style is sometimes used to tell rather serious or dark stories.

Overall, It's a wonderful artbook of an enigmatic Peter Kuper.

Thanks to publisher PM Press for this review copy.

Drawn to New York: An Illustrated Chronicle of Three Decades in New York City is available at Amazon (US | CA | UK | DE | FR | IT | ES | JP | CN) and Book Depository