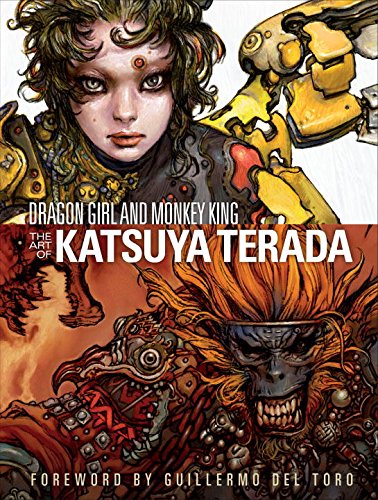 Dragon Girl and Monkey King is Katsuya Terada's artbook for 2014. Terada's a prominent Japanese artist and illustrator who's known for his creative character designs. Over the years, he has released several artbooks and there's something common in them, as in you can tell that he's a tireless sketcher and painter, churning out characters after characters.

The book title is taken from Terada's full-colour manga The Monkey King which is based on The Journey to the West. Volume one and two for The Monkey King were released by publisher Dark Horse.

The Dragon Girl is a character created for this artbook. Terada wanted to juxapose the Monkey King, so he created a metal-winged Dragon Girl. The girl has one good wing and the other is just a wire sticking out of her back, one hand is holding a sword that's made of plants and vines, and she's stepping on what seemed like an alien skull that has a shocked look. That's the imaginative Terada for you.

This is full-colour 200-page hardcover book that's mainly filled with character designs, and it collects the artworks not seen in his earlier artbooks. Other than the Monkey God, Dragon Girl, there are also samurai warriors, Hellboy, Assassin's Creed, Blood: The Last Vampire and many other miscellaneous fantasy characters from Terada's weird imagination.

Most artworks look like they are painted but there are also some sketches and digital art. Terada has a textural style created by the paint strokes and oftentimes coarse linework, perhaps from graphite pencils.

Overall, the artworks are very well reproduced in this large artbook. The only negative aspect would be that most artworks are not captioned, except for the few selected pieces where the commentary appears at the back of the book. There's also an interview with Terada at the back that talks about the different projects he has worked on in the past.

This book is a good survey of work that Terada has created over the years. There is only minor duplication of work shown here and in his other artbooks, so it's still a very worthwhile purchase. Recommended to Terada fans.