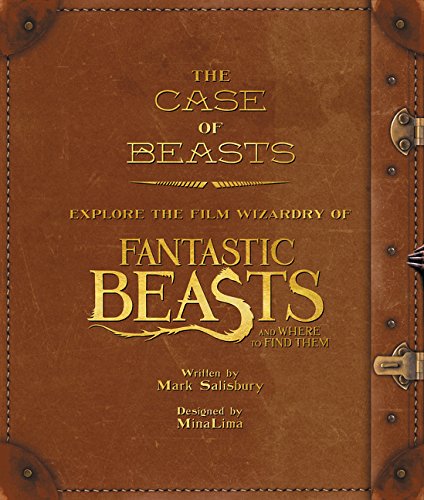 There are two books on the making of the film. This is one (160 pages) and the other is Inside the Magic: The Making of Fantastic Beasts and Where to Find Them (144 pages).

Both books talk about the making of the film so I don't know why it's necessary to put out two books other than to confuse the fans. I recommend getting The Case of Beasts instead because it's the better book.

This is a hardcover book that comes with a magnetic latch which is quite cool as it's made to look like Newt's case.

Focus of this book are on the characters and location. It talks in detail about the actors, the story characters and the locations. It answers a lot of whys and hows. You can read about why the actors are casted, the peculiar of the characters, how they recreated the 1920s New Yorks, how the sets were designed, the props that were used, the research that went into making the film.

There are lots of behind-the-scenes photos, film stills, designs and pictures of the props. This book is presented like a scrapbook. There are also items pasted onto the pages, such as Henry Shaw's campaign brochure, Porpertina Goldstein's identification card issued by Macusa, two maps one of which was shown pinned to a board in the film, large wanted posters for Newt and Porpertina, and an application form for wand permit.

There's so much to explore in this book. I'm pretty sure it will delight all fans of the film.

The Case of Beasts: Explore the Film Wizardry of Fantastic Beasts and Where to Find Them is available at Amazon (US | CA | UK | DE | FR | IT | ES | JP | CN) and Book Depository