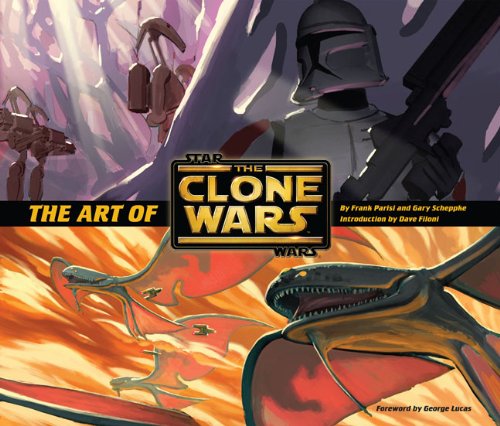 This book is actually published by two publishers, Chronicle Books and Titan Books. I've seen both and they are the same except the price which depends on the country you're in. Chronicle Books is also releasing a US$120 limited edition as well but it's cheaper on Amazon. It comes with a white slipcase with 8 prints in an envelope inside the back cover.

The Art of Star Wars: The Clone Wars is a pretty thick book at 272 pages. It covers art for the movie as well as the TV series. The chapters are arranged according to the 22 episodes with the last chapter containing a sneak peak into Season II.

We have character designs, ship designs, storyboards, environment design, lighting studies, some film stills and plenty of beat boards (scenes featuring major story points). The artistic style and feel here are very different from the usual Star Wars art books since this is for the animated series. The characters might be a little over stylized but that's why it's done in animation.

A great deal of illustrations are digitally painted, to a point I feel there's an overdose and makes traditional pieces stand out by contrast. The detailed pieces are great because they have a hint of textures. The less detailed paintings look like a speed painting pieces with that blotchy feel. Curse the round-point tip brush! I guess I still like to see textures created by brush bristles.

The pencil sketches and other non traditional medium pieces are delightful to look at because they are more organic and the style is a breath of fresh air compared to the digital paintings. Many of the sketches come with handwritten notes from the artists.

Film stills are very few and there are almost no 3D models. This book really focuses on the pre-production concept art.

All the drawings are captioned by the artists and production team. They talk about the concept and sometimes some production stories, such as rigging, modeling and texturing. The pencil drawings on General Grievous's original form before mechanical "improvements" are interesting to look at, and read since the artists couldn't decided whether he's should be a gorilla or cockroach.

Overall, I consider this art book is worth the money because of its satisfactory volume, and art of course.

My reservation is only to the insane amount of full coloured illustrations digitally created. It's a personal preference.

Hey Parka, as always a wonderful review.
I just found this on Amazon today and got all excited about it.
Then realised it was already out and of course the first person to review it was you!
Well done.:-) and thanks for being THE ultimate resource for Art Of Books..
Cheers
Inger

Hi Parka,
I've just received the book and my first impression is that your review were right. There is an "insane amount of full coloured illustrations digitally created".
Most of the time, I really like digital painting but I hoped more "real" concept art is this book.

I'll come back later for a second impression ;o)

Is the slipcase and 8 prints the only difference between the regular and limited edition?
I'm asking because it's on hugh sale at Big Bad Toy Store, and I'm not sure if it's still worth the extra 15$..
https://www.bigbadtoystore.com/bbts/product.aspx?mode=retail&product=CHB...

@LIRCH
I think those are the only differences. There are a couple of good deals from Amazon merchants as well.

Good deals but they don't ship to my address :-(
I guess I buy the regular..
Thanks anyway :-)

I have this, and yep, totally agree that there's just too many digital renderings, and not enough sketching (concept art). Overall, having seen most of The Clone Wars episodes, I find the series underwhelming and not that great. Sometimes I'm left wishing for better writing. For a series about war and strategy, I often wonder if the strategies depicted in the series would in real life result in defeat sooner than later. And the worst thing is all the politics and the lives of politicians...boring. The only thing I'm left hoping for is for Asoka to die a cinematic death in the final episode or whatever. The book is a reminder of how great this series could have been, but alas...so far not quite there yet. Here's hoping that the direction of the series turns darker. It is after all about war.

Just purchased the limited edition and I have to say it’s pretty darn good. For those of you in the UK, there are a few editions remaining at the Forbidden Planet store in Bristol for the ridiculously low price of £19.99. Happy buying!

hi,
in the last bluray edition of Clone wars, there is a new artbook, different from this one and looks more interesting. does anybody where we can purchase it alone (without the bluray of course!) ?
https://www.amazon.com/Blu-ray-Star-Wars-000-Sets-limited/dp/B00EIG5M3C