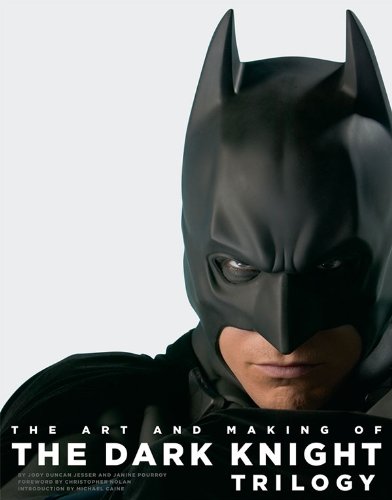 This is the making-of rather than an art-and-making-of book. So you're not going to see a lot of art. The only other artbook for the Dark Knight trilogy was The Art of Batman Begins and that wasn't very good in terms of art and content.

Having said all that, this is a great movie companion book.

It covers in detail all the three films and the complete production process. You get to read about the screenplay, production design, casting, use of visual and special effects, music and marketing. The book is packed with nice photos of the set, actors, props and vehicles, and some art illustrations.

There are chapters for the shooting of each film which I thought was short considering the length of the movies. Still, it provides great insight into how the movie was shot, and the little clues were put into each film to tie them together. You get a sense of Christopher Nolan's film making philosophy, and understand how the film was directed. He has done an incredible job portraying on big screen one of the most recognisable comic characters.

There are lots of interesting information throughout the book. Like how Anne Hathaway dressed up as Harley Quinn during a casting meeting because she misread the script, or why Nolan even considered using actual bats but ultimately turned to animated ones.

Of all the books relating to the Dark Knight trilogy, this is probably the best.

Highly recommended for fans of the movies. It's a terrific deal for a 304-page hardcover.

Are there any pages dedicated to Miranda Tate in this book?

Not really. There is a casting chapter but it's more focused on why they choose this guy to play this character. Not much about the characters themselves except the main ones.

Hmm, trying to decide between TDK Manual and this one.. Parka, have you gotten a copy of the Manual yet?

I don't have TDK Manual but I've seen it. It's scrapbook style with many removable documents. You can see some pictures from the link below and from the video a customer loaded on Amazon product page.

Cheers, I did see that preview but was thinking you might do a review of it. I'll probably get this one, looks more interesting even if it has less art..