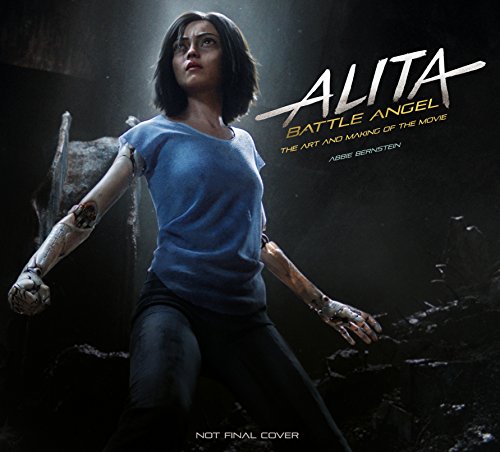 This is a terrific book for Alita: Battle Angel that features the concept art and covers the movie production in detail.

The book's a huge and heavy 232-page hardcover published by Titan Books, written by Abbie Bernstein, with foreword by director Robert Rodriguez and afterword by film producer Jon Landau.

The idea of possibly making Alita into a movie was conceived more than a decade ago when Guillermo del Toro introduced James Cameron to the long running manga by Yukito Kishiro. Then in 2000, Lightstorm acquired the rights to Alita and a screenplay was written by James Cameron. At that time, James Cameron was deciding whether he should make Avatar or Alita and he chose the former. So Alita was put on the back burner for almost 15 years until he talked to Robert Rodriguez in 2015 about it. An intense film production followed and in 2019 we have Alita on the big screen.

What I've just written in the previous paragraph is just a short story collected in this book that covers the film production in detail. You'll read about how the screenplay was adapted from the manga, how they shot the live action, merge the CGI and the logistics involved.

The book is filled with concept art, some which were from more than a decade ago. There are character designs for the characters and the many cyborgs, cybernetic parts, Berserker body, vehicles, Motorball, sets for Ido's clinic, Iron City, scrapyard, Kansas bar, Underworld, Chiren's lab, ruined cathedral, Victory Gate, Badlands and the Motorball stadium.

This book is packed with lots of behind the scenes insights and interviews with the production crew. There's a lot to read. This is a wonderful book for those who want to learn more about the film, and check out the concept art.

The book can be found at Kinokuniya and Basheer Graphic Books.

The book can also be found at Kinokuniya and Basheer Graphic Books.

Hi. In my opinion, this is a movie that Cameron should have done instead of Robert Rodriguez, but the book is terrific indeed. Thanks Parka, :D