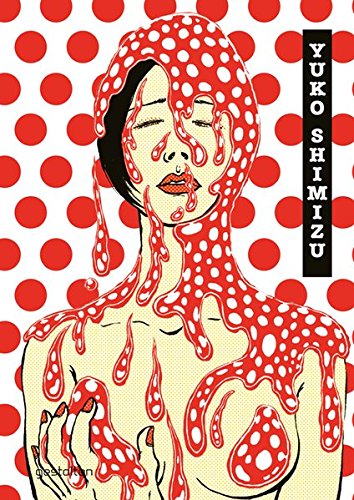 Images and book description are from Gestalten:

The exceptional illustrator Yuko Shimizu creates her work at the intersection of traditional Japanese graphic prints with surreal comic art. The award-winning New York-based artist draws her basic forms and figures with calligraphy brushes and later digitally supplements them with additional colors and backgrounds. This technique results in elegant and harmoniously composed creative visions and science-fiction fantasies, which are often erotically charged and combine the best of American pop and Japanese comic culture.

The New York-based artist and illustrator initiates each project with classic illustration methods. She draws her basic forms and figures with Japanese calligraphy brushes and later digitally supplements them with additional colors and backgrounds. This technique gives her elegant and harmoniously composed images the look of graphic prints.

Her science-fiction fantasies and personal creative visions, which are often erotically charged, combine the best of American pop and Japanese comic culture.

This is very cool. A lot of inspirational work here. Another great review. I tip my hat to you Parka.

@David
This isn't a review. Actually labeling it as 'Preview' isn't quite right also since the book is already out.

Anyway, what I want to say is, it can't be a review if I don't actually have the book.

Ok. Still enough for me to pick it up. Thanks for posting anyway.

Thank you very much for the post. Really appreciate it.
Yuko