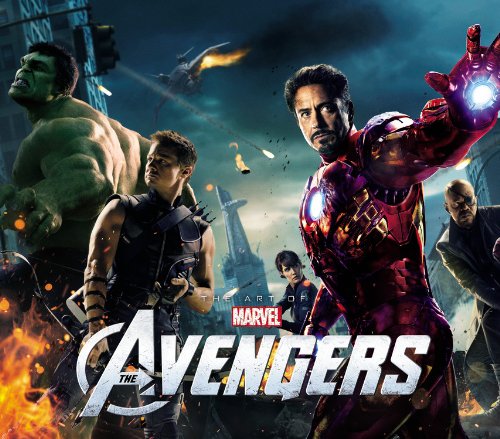 Just like other Marvel movie art books before, this is big and thick. In fact, at 272 pages, it's thicker than The Art of Captain America and The Art of Thor which are both at 240 pages each.

The cover looks great and it's actually a slipcase.

Almost all aspects of the movie are covered. There are the Avengers themselves with their new costume designs, Loki, The Chitauri, flying leviathans and other characters like soldiers, Nick Fury, etc. The art is great and these are all printed big. The characters are mainly drawn by Andy Park and Charlie Wen. Most look very much like the actors. The Iron Man design is, as usual, amazing. There are also a few pages of Hulk art which are new obviously since there are no Hulk movie art books.

Many locations, props and vehicles are featured as concept art. You'll see Bruce Banner's hideout home, Tony Stark's tower a breakdown of the technology that suit him into Iron Man or un-suit him, the warehouse where Black Widow was held, the Helicarrier and its interiors and even the tunnel Loki escaped in. The props are all sort of gadgetry shown in the movie, stuff like Hawkeye's bow, other weaponry, a sequence of Tony Stark suiting up into Man VII in mid-air. There is a lot to see because some pictures are filled with details. The visuals are spectacular.

I think the layout is slightly chaotic because there's a lot going on with so many characters and big set pieces. The content is presented chronologically as they appear in the movie.

The writeup is extensive and there's a lot to read about various part of the movies. This will probably be very interesting to those who want to find out how The Avengers differs in areas as compared to the comics.

This is an awesome art book and informative movie companion. Highly recommended.