This is a guest review by Annamarie

Hi there! My name is Annamarie and I work as a freelance artist. Today I will be reviewing the XP-Pen Artist10S that I purchased recently.

This is a pen digitizer monitor by the company XP-Pen that is aimed to rival the likes of the Cintiq 13HD.

I came across this tablet while researching a replacement for my old Intuos Pro Medium.

It must be noted, however, that this is a rebranded version of the Yiynova UC-logic SP-1001. There have been changes between the SP-1001 and the Artist10S though. Let us go over those changes!

The product was securely packed and shipped in a normal brown cardboard box. The product’s packaging was a pleasant surprise. The package inside the cardboard had a white and black design with an image of the tablet, name of it, and the company’s logo on the front as well as an inked drawing next to the tablet picture.

It was a nice change of pace as most alternatives usually don’t have anything special or unique about the packaging.

The items included were:

The Artist10S is made of matte black plastic that has a 10.1”screen. To the left of the tablet are 6 customizable buttons that you can assign to keyboard shortcuts. To the right side of it, where the logo is placed, is where your HDMI and Power cables will be plugged into. The tablet itself is pretty light and thin, yet surprisingly sturdy. It’s about half an inch thick overall, and the outer plastic isn’t too flimsy which makes resting your palm on the screen to draw not so worrying. 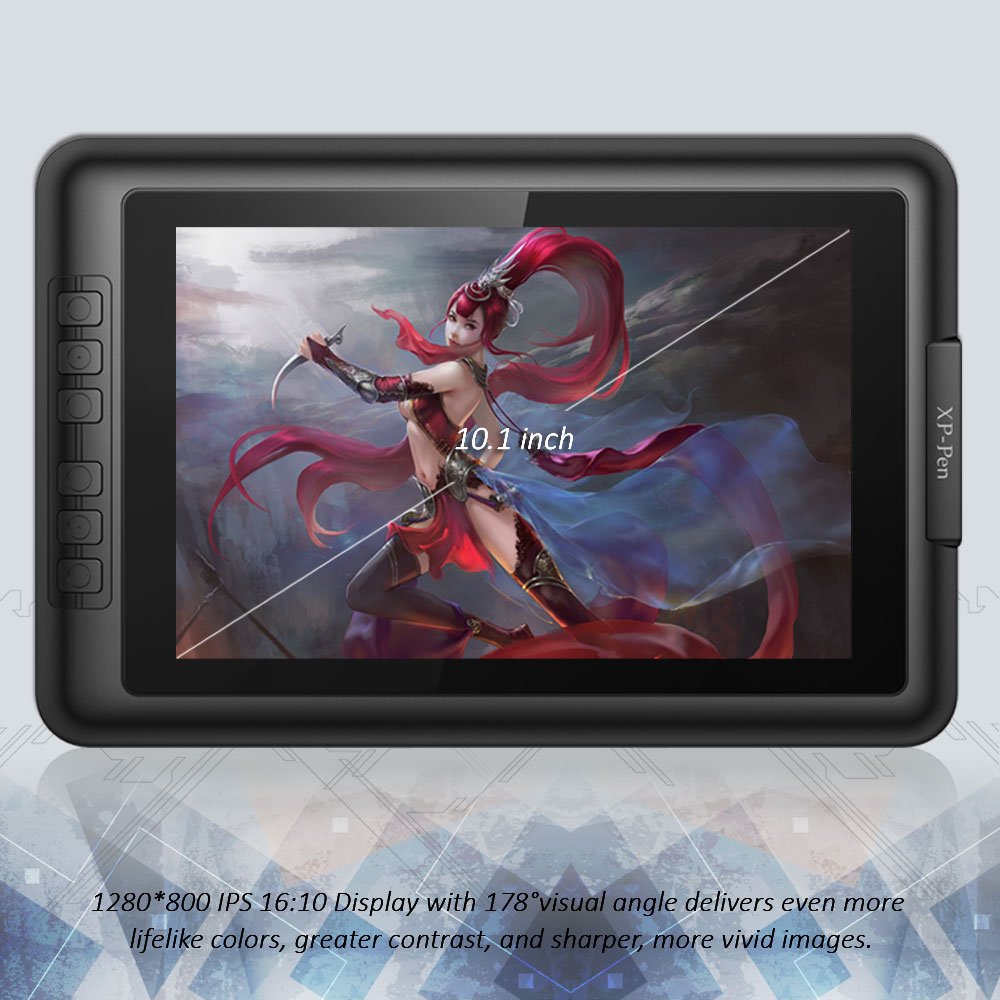 The 10.1-inch screen is actually an IPS display that has the resolution of 1280 x 800. When tablet is connected as an external monitor, it can either mirror the display, or be used as a second monitor (extending the screen). The resolution might be a problem to some if your monitor does not support the size, as it may cause your main monitor(s) to be stretched. The screen is slightly glossy which may also be an issue to those with bright light sources situated behind them while working, but if you have low lighting or have the lighting at a distance there should be no issues. As mentioned before, the screen has no real texture to it, so it may make drawing slightly harder for those who prefer having some resistance. 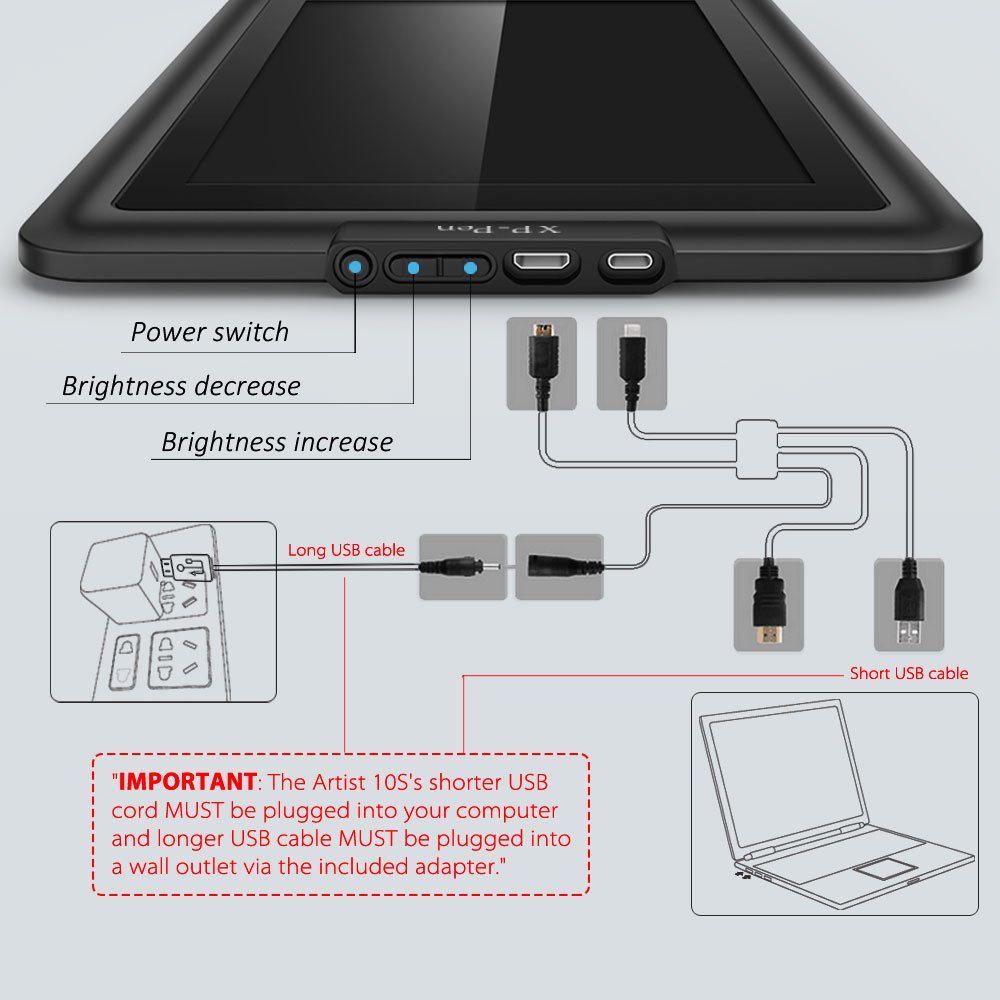 On the side of the tablet are two ports for cables that go to the computer's USB port, HDMI graphics port and the power outlet. Overall, it saves you from having an unnecessary and bothersome cord clutter on your desk which is greatly appreciated.

It must be noted that the tablet does not come with a stand nor has any built-in stand, which is slightly disappointing. The company does offer a stand for it separately for it with the price of $30.

The pen body is slightly triangular, 6 inches long, and is under half an inch thick. This may cause problems for people with bigger hands but it isn’t too uncomfortable. The nibs are a bit thicker than Wacom’s pen, but this is neither a negative nor a positive as it comes down to preference. There is no eraser either, however most alternatives at this price range don’t seem to have one.

This pen supports 2048 levels of pressure, which is the same level of pressure I've been using before so it didn’t feel any different switching over. It is also a passive free pen, so you never need to charge it or replace any batteries. It also has 2 buttons on the lower half of the body, but there is not much customization to them.

Unfortunately I do not have a Mac system to test this on, so this will be only for Windows.

Drivers were easily installed with no issues and it was ready for usage immediately after installation. Something to note though is that I uninstalled all previous drivers I had on this my computer before installing as recommended.

The drivers don’t offer much beyond pressure adjustment/testing, calibration, and express key settings. The calibration offers a 4 point and 9 point option, and I highly recommend using one or both of them once you boot it up. When I first installed it, the cursor offset was a problem. It was not horrible yet bothersome enough to require fixing. After messing with calibration a few times to try and fix the parallax, I was able to get it almost completely on point.

Drawing on this device is delightful but with a few cons. For starters, the natural pressure curve is beautiful. It’s really nice and fluid, and works well with most, if not all, of the programs I tested out. The lag is small to none as well, with the cause being usually sketching too fast for the cursor to follow. So if you are a pretty fast sketcher, this is something to look out for. It is not particularly bad, as it only lags for about a second at worst. Below are some examples of work i did with this tablet!

The XP-Pen Artist10S is a great tablet for people who either prefer smaller screens or travel a lot but don’t want to break the bank for a Cintiq. It loses a bit in build quality and performance, but being less than half of the 13HD price, I think it does what it can very well!

The company offers the tablet for purchase via a store on both Amazon and Ebay. To add clarification, the eBay seller is XP-PEN themselves and not a random person. I ordered mine from eBay personally and it was shipped in good condition. :)