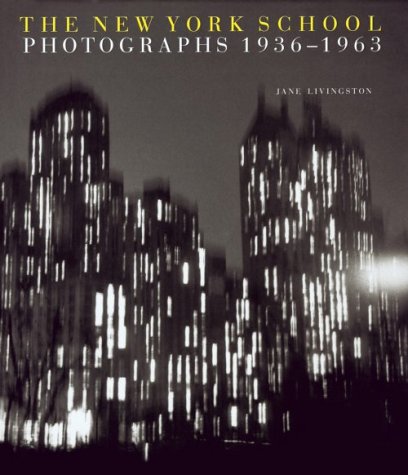 As this thick book hasn't been reprinted or released in paperback, since the first edition in 1992, it will explain the high price and also I like to think it's because it has come to be regarded as a first-class bit of scholarship about the subject. Author Livingston has written a fascinating study about sixteen photographers who could, by now, be considered the founders of the New York Style, though this clearly is not an established photographic genre: yet.

Out of the sixteen: Arbus; Avedon; Brodovitch; Croner; Davidson; Donaghy; Faurer; Frank; Grossman; Klein; Leiter; Levinstein; Levitt; Model; Vestal and Weegee there are some I had never heard of so the book was a useful introduction to Don Donaghy, Leon Levinstein and David Vestal. All of them are woven together in the author's eighty-eight page essay. Firstly as an overview of the period where magazines, books, galleries, movies, culture and not forgetting Cold War politics, created a climate of inward looking documentary photography, especially of shots on the streets of New York. The second part looks at individuals and their contribution to the style. Each of them also gets a biographic spread (with a photo) at the back of the book plus a really comprehensive exhibition and bibliography listing.

The first 251 pages are the photo portfolios with twelve or so from each photographer. Presented as spread and whole page bleed images or with generous margins though strangely the twelve from Don Donaghy are all six by four inches. An interesting production theme has the photos printed as duotones (with a 200 screen) on four kinds of paper from matt to semi gloss art. Alexey Brodovitch's very soft focus images from his 1945 Ballet book are on an appropriate matt creamy white while the rather hard edge Diane Arbus contributions are printed on a much whiter semi-gloss. The photo section I thought was quite remarkable because these are very personal images yet they seem to hang together, possibly because of the common subject matter, in a group style.

A common theme with several of the sixteen photographers is their involvement with the Photo League, co-founded by Sid Grossman and Sol Libsohn in 1936. The organization ran a photo school and encouraged documentary photography with a social intent. I only mention this because membership was important to many of these photographers and the background to the creative aspects of the League are well covered in Photography and Politics in America: From the New Deal into the Cold War, by Lili Corbus Bezner. Both books but especially Jane Livingston's, with some fine examples, cover a fascinating era of American photography.

Coney Island by Weegee, 1940. One of first the twelve pages in the book with whole page photos to set the theme.

From the Sid Grossman portfolio.

Who else but Weegee.

From the Richard Avedon portfolio.

Helen Levitt from the thirty-four pages of biographies in the back of the book.