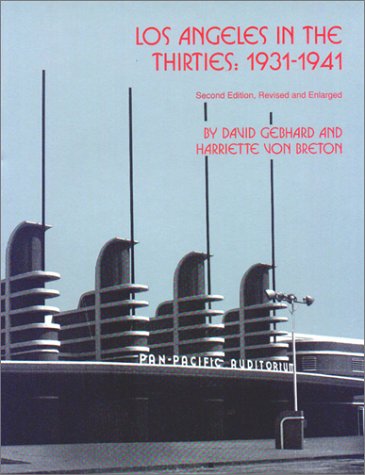 A very readable account of private and public architecture in Thirties LA. This is an updated reprint of the first edition which appeared in 1975. That copy was produced as a rather annoying upright paperback, just two-thirds the width of this edition, which made it rather difficult to read and didn't do the photos any favors, they are mostly square or landscape and get a much better showing in this edition.

Gebhard and von Bretton clearly know their subject (and nicely, write with clarity and enthusiasm). The contents essentially divide architecture into three sections: Public; Commercial; Private. Each gets a long essay followed by comprehensive photo sections. I thought it was slightly unfortunate that the photos were not referenced into the text pages.

The book is basically a visual one with 225 photos, this includes a small number of house floor plans. I was impressed with the selection of images especially the number of exteriors in the Residential chapter but all these interesting photos are only printed in a 133 screen and on average paper (so four stars). Admittedly the book was published in 1985; if it was issued today I feel the print quality would be much better. Covering the same subject Thomas Hines monumental Architecture of the Sun: Los Angeles Modernism 1900-1970, has many of the same photos but the book is printed on a matt art paper and the images look first-class.

Despite the rather soft and grey look to the photos I think this is as good a survey of Los Angeles Thirties architecture as you'll find. Just avoid the first edition even if it is a bargain price.

The original 1975 edition which was a rather silly upright book two thirds the width of the second edition.