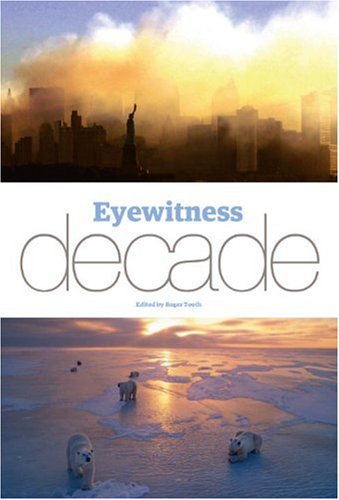 It's all in the detail

The decade or year in photos is an old standby in the publishing biz. Who remembers the yearly photo specials Life Magazine published after the weekly folded in the early seventies. I always thought the format slightly flawed because photos were frequently used that weren't particularly inspiring but had to be included because they recorded a newsworthy event. Fortunately the criteria for inclusion in these pages is simple: is it a great photo.

When the Guardian newspaper was redesigned in 2005 the center spread was devoted to a stunning photo. The ones in the book for the years before that have been selected on the basis that they would have been included in the center Eyewitness spreads. In his intoduction, Roger Tooth photo editor for the daily, explains the criteria for inclusion: the photo must be able to be blown up to twenty-four inches wide without any loss of quality; it must have plenty of detail; everything had to be in sharp focus and finally it could be a news or slice-of-life image.

Each year of the decade gets about eleven photos, either as whole spreads or as landscape on a page and fortunately, unlike the daily with its 100 screen these photos are printed with 175 screen on a good matt art paper and incidentally the Honk Kong printer C&C Offset should be congratulated on perfect binding: all spread photos butt together perfectly.

Virtually every picture is an eyeball grabber, whether a news shot like the pulling down of Saddam Hussein's statue in 2003 in Baghdad or the totally non-newsworthy event of the partial demolition of a house that belonged to a trailer-park owner by a resident who had a grudge again them. One thing I really like about the contents, there are virtually no celebrities included. I would say that most photos have been taken outside in the environment in cities or the countryside. As the Guardian is a British paper there are some photos that relate to events there but overall this is a very international selection.

If you are a news or documentary photographer or just want to see stunning photos of what's happening in the world I think this is an impressive book. It might be worthwhile checking round the web because I bought my copy (nearly new) at a very impressive low price.

Each year opens on a spread like this with text relating the year's events and brief timeline on the right.

2001. Mrs Thatcher waiting for Big Ben to tell her times up.

2003. Buy the book or the rabbit gets it! Pet rescued from US bombing in a Baghdad suburb.

2003. US Navy ships waiting to be scrapped in England.

2006. Giant baby sculpture and chess players in a Budapest spa.