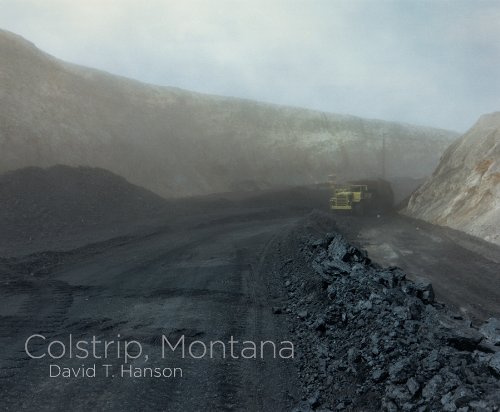 David Hanson's eighty-two photos provide a fascinating look at Colstrip as it was in 1982 to 1985. Put it into Google maps and you'll see that the mine has expanded since then though the place is small enough not to be worthy of their Street View facility. Obviously the mine and power station are dominant in the area but it's still a bit less than .04% of Montana's surface area. However with more than 120 billion tons of the black stuff just under the State's topsoil the town's residence are assured of a continuous future (so long as the water supply lasts).

The photos, especially the aerial ones, give a very graphic description of strip mining but like all extractive industries it's just not going to look neat and tidy. For a real polluted mess have a look at OIL with coverage of that industry by Ed Burtynsky. His photos of the oilfields in Baku, Azerbaijan, when it was part of the Soviet Union, show environmental damage on a colossal scale.

Thirty of these photos originally appeared in Hanson's first book: Waste Land: Meditations an a Ravaged Landscape, which I thought was a much stronger expose of how industry savages the land. In four sections: Colstrip; Minuteman missile sites; Waste land; Montana 1889-1989. Waste land is the longest section, devoted to sixty-seven of the most polluted sites across the Nation (in the early eighties) and it has a rather clever editorial format (see my uploads). Each spread has a large aerial photo on the right-hand page of a polluted site and opposite a map with the site indicated and some text relating to the site owners, extent of the pollution and clear-up solutions and in many cases, how the owner's have attempted to wriggle out of their responsibilities. All the information is taken from EPA material and it seems the military is the biggest polluter overall. Hanson's aerial photos in both of his books work so well and really point out the problems in explicit detail plus they have the added bonus, when showing waste water, of looking quite beautiful, in an abstract sense.

'Colstrip, Montana' is a handsome production in the classic photo book format of having one large plate on the right and a blank page facing it, though here fortunately, the left page does have a caption. America's top art book printer Meridian of Rhode Island brought out the best in the photos with a 200 screen on a good matt art paper. I think this could become a classic environmental photo reportage book.