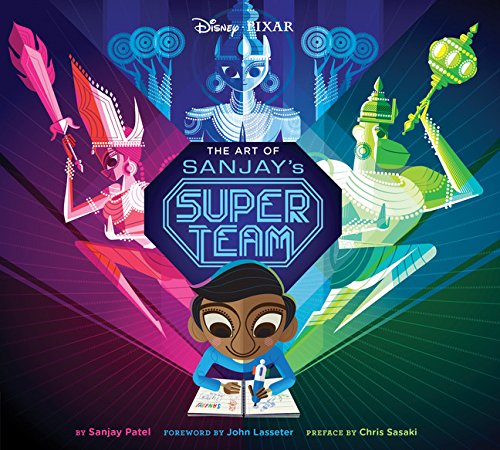 I actually enjoyed this 7-min short film more than The Good Dinosaur that followed.

There are several things about Sanjay's Super Team that I really like. First is how different the idea and concept is compared to all other different Pixar films. It's actually something about culture and religion. The second is the action scenes that are really dynamic, impactful, almost anime-like. And third is the beautiful lighting and set design. All these are discussed in the book.

This 130-page hardcover is a wonderful companion to the short film. It collects plenty of concept art with commentary by director Sanjay Patel and other artists who worked on the film.

There's a touching introduction about how Sanjay's father and the Indian culture inspired the story. Throughout the book, there's interesting details on how the characters came about and how storytelling was to be approached.

The artworks are also fantastic. There are storyboards, designs for the characters and the temple set. All are drawn in a very stylised manner that's can be considered similar to picture books that Sanjay Patel has worked on.

There's so much depth and information compared to the recent Pixar artbooks that are almost wordless, e.g. The Art of Good Dinosaur and The Art of Inside Out. I'm relieved that my money is well spent this time. It's a very nice book.