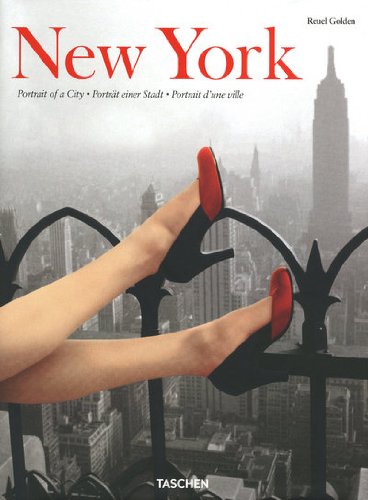 This lovely book follows the same format as Taschen's Los Angeles, Portrait of a City: a history based on named photographers though there are many fine images taken by anonymous snappers. The LA book had thirty-nine photographers but as this is New York it takes 124 of them and over 500 photos to expose the city.

All the regulars are here, photographers who have created that special look over the years. Abbott, Bubley, Eisenstadt, Feininger, Klein, Orkin, Riis and a good showing from Weegee but what I found fascinating was the number photos from anonymous sources. Right up to the late Forties unknowns had taken some quite remarkable shots revealing a particular aspect of city. Some of these run over spreads throughout the book and they look stunning. Pages 108-109 have that famous shot of the sunlight streaming through windows at Grand Central Terminus, anonymous from 1929.

The book's five chapters look backwards over 160 years starting in 1850 and though maybe one could fault it by only using historical photos rather than a wider range of graphic images I think it succeeds because of this. The city has a long pedigree of photographic interpretation and some of the best works are in these pages. I thought it a plus that so many well-known images are mixed in with the dozens and dozens of not so well known shots and all collected in this big, chunky book. Another plus, least from my point-of-view, is that there are very few photos of popular culture celebrities. The celebrity is the city with nearly all the images exteriors showing the changing landscape, people (mostly just New Yorkers) or just out on the street.

Mixed in with the photos there are largish thumbnails of cultural graphic items: book jackets and posters for plays and movies. The back pages have an interesting listing of suggested cultural reading, listening and viewing and all the named photographers get a hundred or so word biography.

Like Taschen's LA book this is a lovely designed and printed title that takes a different and fresh look at New York. The large page size and huge photos celebrate one of the world's great cities.

The classic Grand Central Terminus photo from 1929, taken by an anonymous photographer.

Herb Schartman's stunning shot of Times Square from 1947. Lots of snow and no traffic.

Both interesting anonymous shots from the Forties.

Left: Exchange Place, Broadway and the building of the subway system.

The book has plenty of spread photos like this one, full of fascinating detail

Typical spread with photos, captions and city related graphic (the poster for Funny Girl, 1968). Throughout the pages graphics include book jackets, LP covers and posters for shows and movies.

Other NYC titles worth checking out.