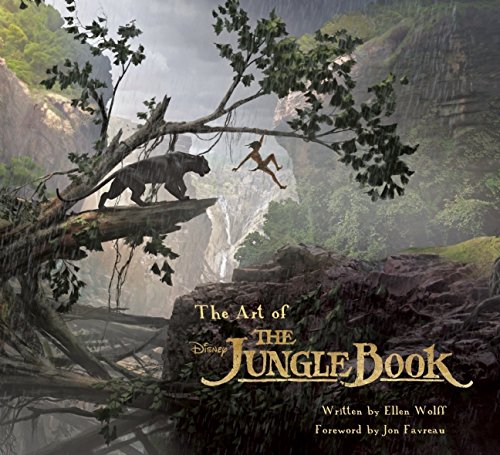 This is a nice artbook companion to the film although how much you like it will depend on the style of art you prefer.

Watching this movie reminded me of Avatar and The Life of Pi. Unlike those two movies, at least The Jungle Book has a decent artbook.

You'll get to see the concept art, pencil sketches, storyboards, film stills and commentary on the making of the film.

Other than the wonderful pencil sketches, most of the artworks are in the realistic style. It almost feels like the artists painted over a film still but not quite. Maybe they just used some 3D base to paint over with textures from photo reference. Regardless of how the artists did it, the resulting artworks are often highly detailed, very textural and the lighting is depicted in a very real manner. Most importantly, they look good, and even if photo textures are used, they are blended perfectly into the art. I love the pencil sketches and felt they could just have a whole book on those.

The amount of character art for the animals depends on how much airtime they have one screens. Of course the main characters have more art and stills, such as Mowgli (Neel Sethi), Baloo, Bagheera, Shere Khan, Raksha, Kaa, Akela and King Louie. The cute friends of Baloo and other animals, not as much relatively speaking.

The book also features a good amount of film stills. If you don't already know, all the animals and environment are created digitally. So I guess the film stills themselves could be considered art. I do enjoy the film stills because they are able to show you just how detailed the animals, especially the fur.

Those will like reading about film production will be delighted that the commentary talks about the filming process, about things like casting, music, compositing, and how they actually create the animals and environment digitally. The last few pages shows you how they used reference photos to create their own environments, render it, and put the animals into the scene. It's a simplified look at the process involved but I'm very sure it's incredibly difficult to do because the book mentions everything has to be created digitally, every leaf and branch. That's the power of technology nowadays.

Overall, it's a wonderful artbook companion to the film. I particularly enjoyed finding out how the film was made, and also admire the art and effort behind the making.