Below are the sketches I drew while in Malacca, Malaysia.

It wasn't easy as the weather was quite hot. Best time to draw is always in the morning or evening. Not just because it's more cooling, but you also get to see shadows being cast from the sides than from the top. 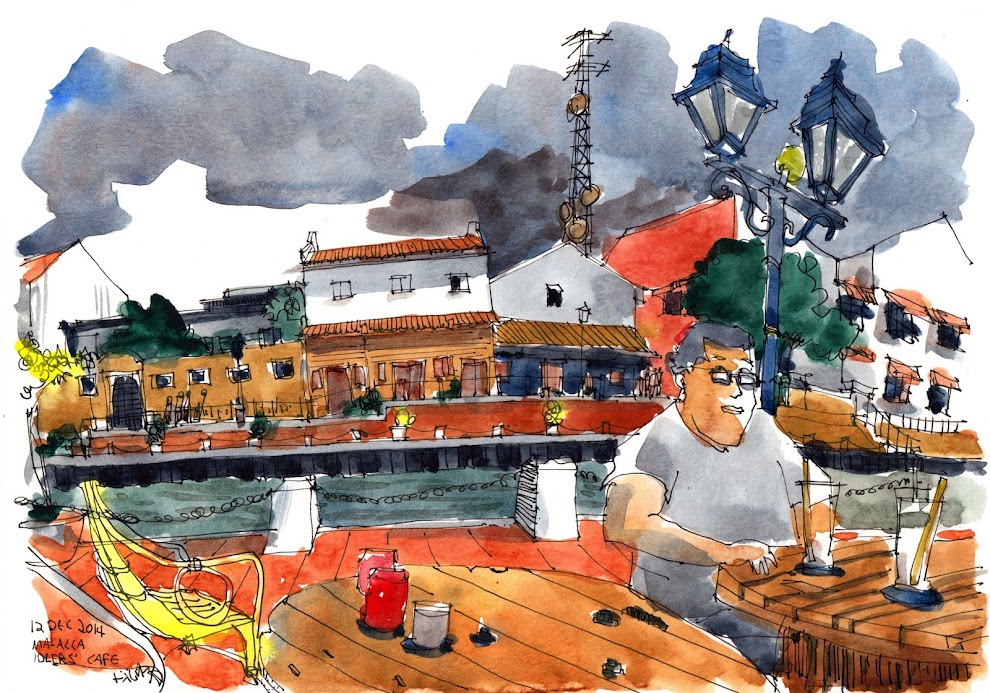 My first piece was a disaster in terms of colour choice. Too much colours were used. As Walt Stanchfield said, "We all have 10000 bad drawings in us. The sooner we get them out the better."

I brought along a Sennelier 12-half pan palette watercolour box set. It's a set I bought for review but don't use often. I still need more time to get used to the colours and mixing. 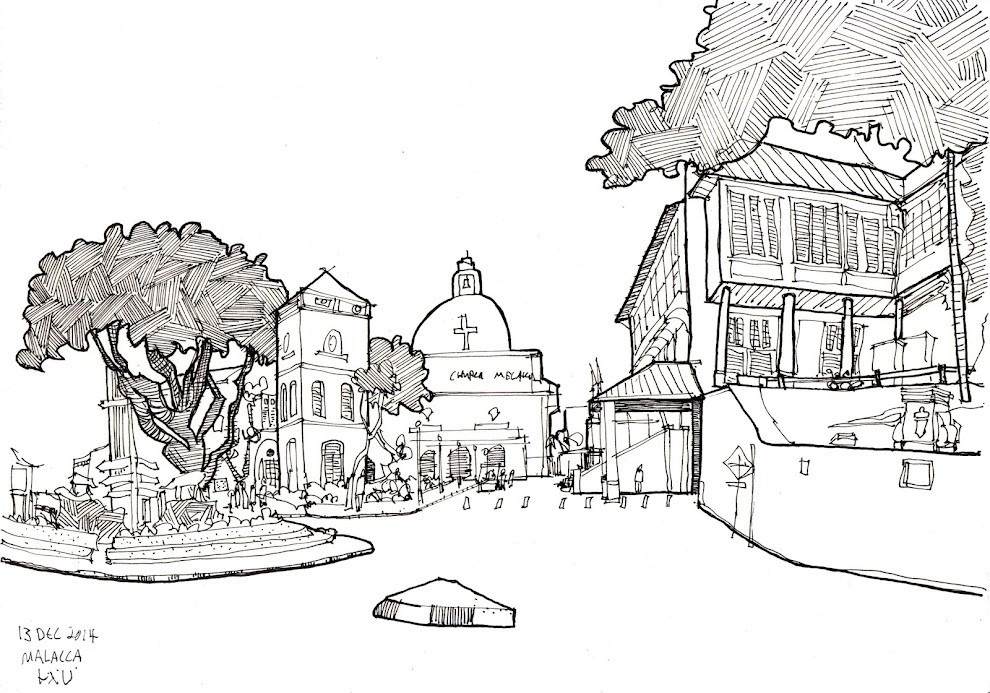 In the background is the famous Chris Church in Malacca that was built in 1753. Just for some comparison, Singapore was founded only in 1819. I always enjoyed looking at architecture and visiting places older than Singapore. I find it fascinating to read about stories from the time before there was even Singapore.

I probably drew this pen and ink sketch under an hour. The thick outlines were added with a 0.8 Copic multiliner at home to make the form of the buildings stand out more. 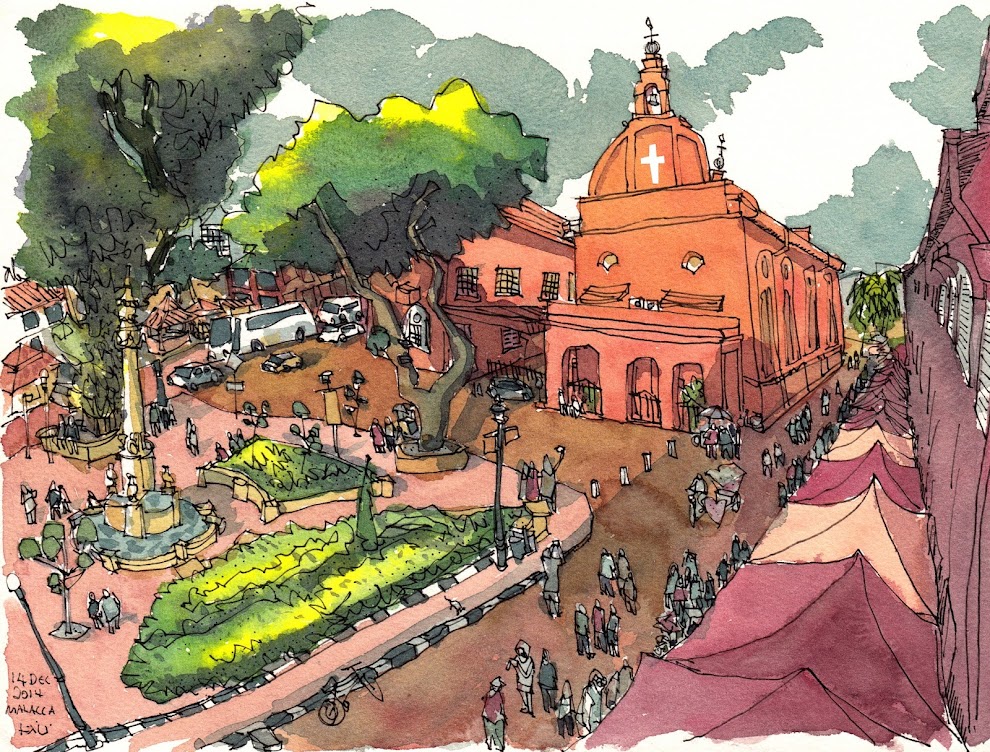 This is another sketch of the Christ Church. After completing the black and white sketch of it, I knew I had to go back and draw another piece with colours added. This place is iconic because most of the buildings around are painted red.

I stood on the balcony by the side of this building called The History and Ethnography Museum (Muzium Sejarah Dan Ethnografi) located at the Stadthuys at the junction of Jalan Kota and Jalan Gereja. It's a good place to take photos too with the church in the background.

This sketch was drawn in the evening so the sun has moved over to the front.

The white cross on the church was added in Photoshop. I forgot all about it and painted the whole building red and only realised it back at home. 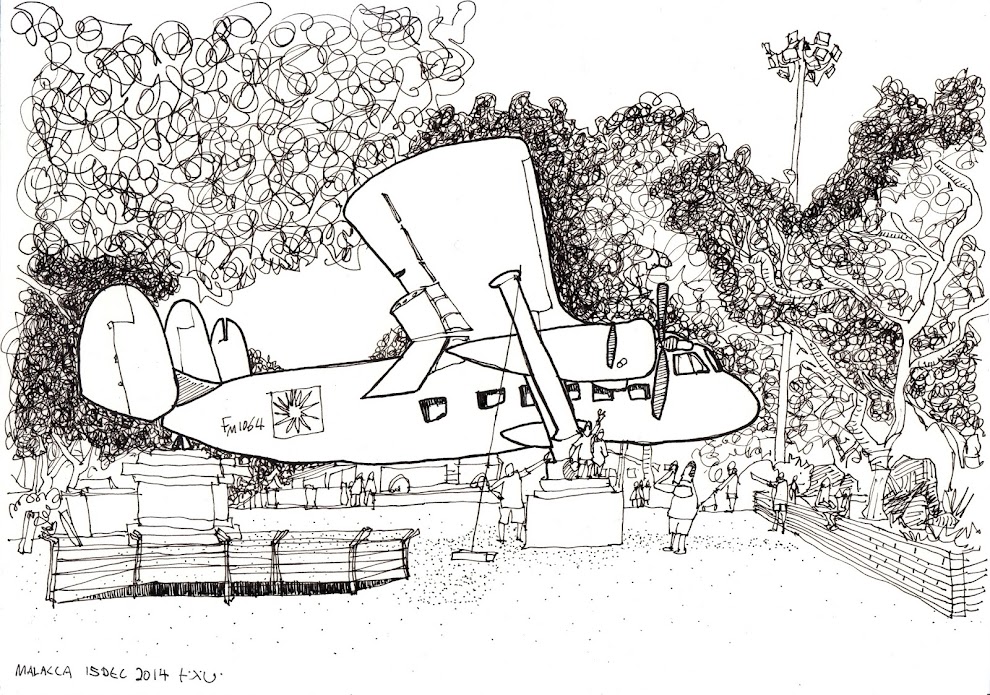 This is a big plane model at the park beside Jalan Taman. I was trying out different ways to draw leaves. If you noticed from the earlier black and white sketch, I used hatching for the leaves. Here, it looks like smoke. LOL. 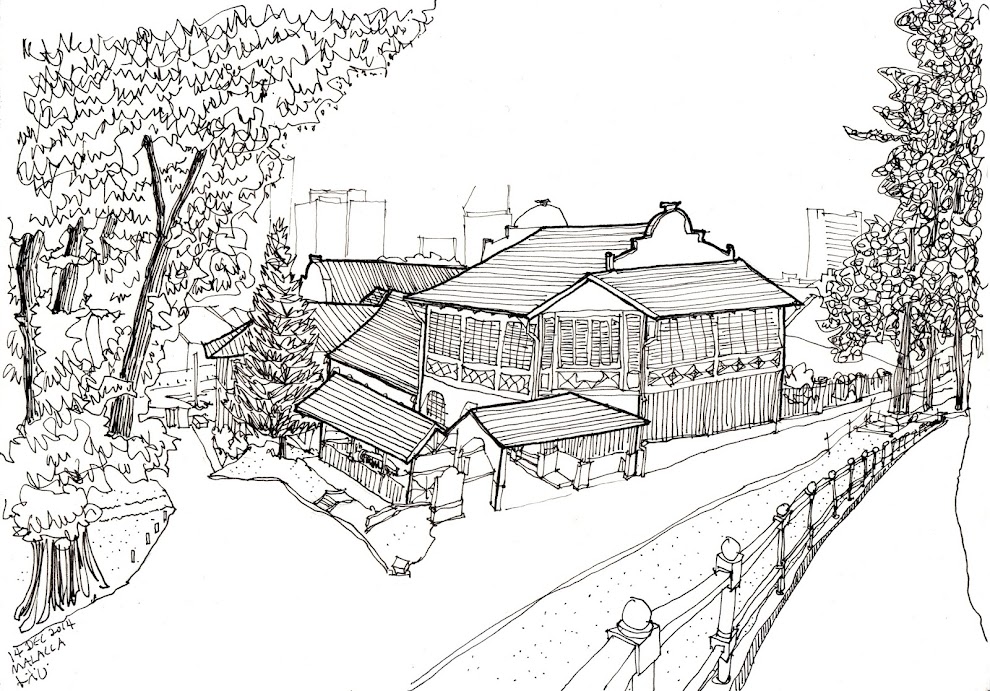 This is the front of The History and Ethnography Museum. Again, I drew in the thicker outlines to make the important forms more prominent. 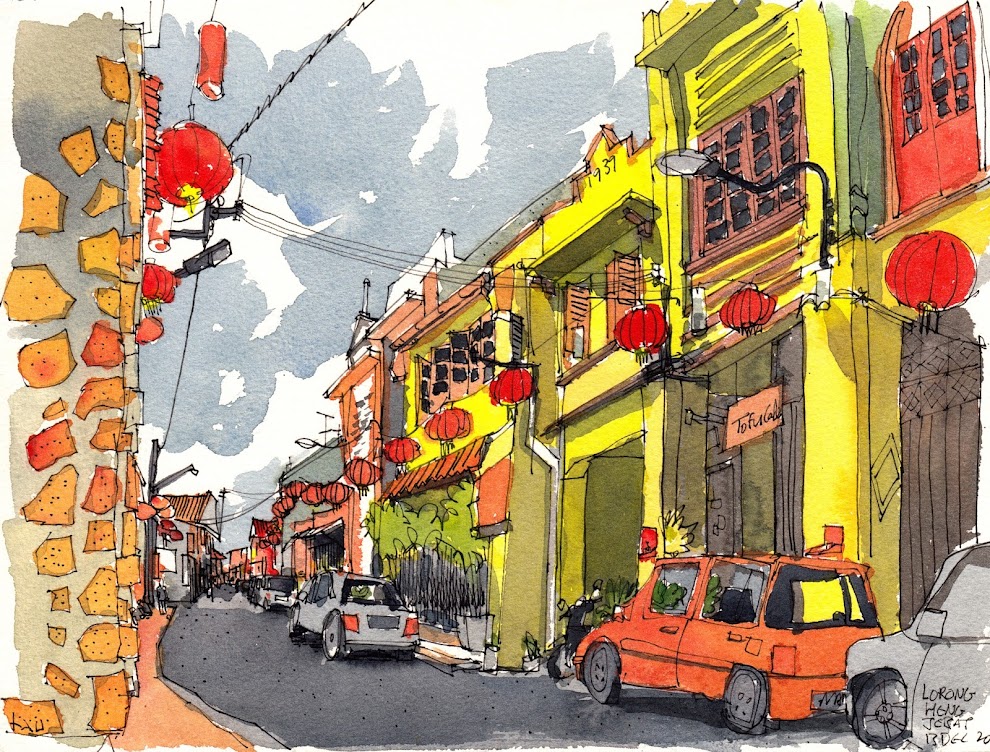 I like drawing the old shop houses along the streets in Malacca. There are so many of them and have so much character. 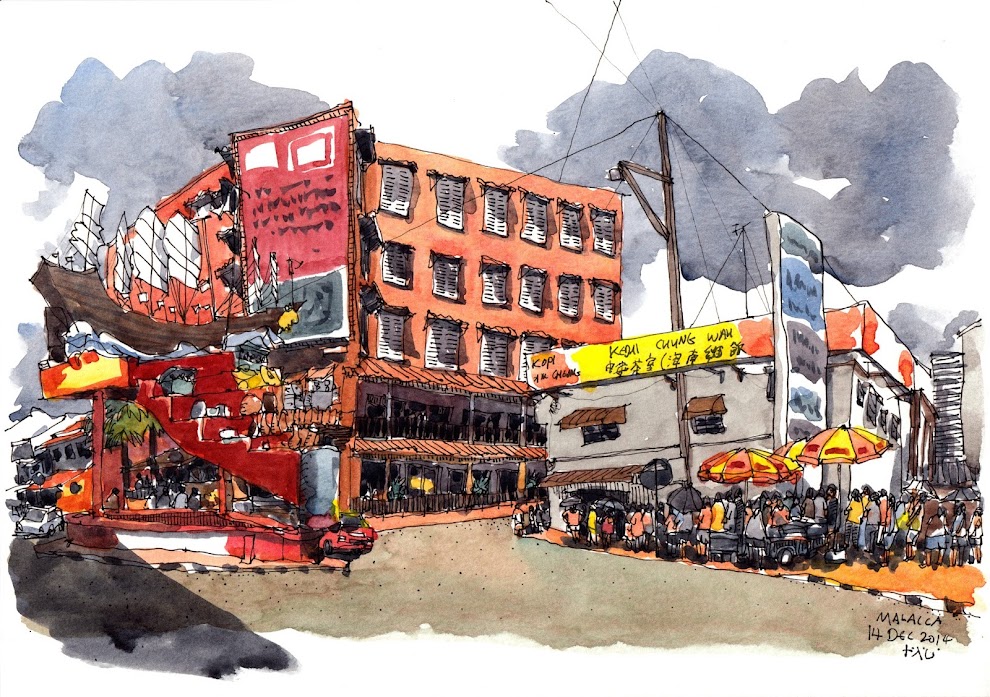 This is the junction at Jonker Street leading to Jalan Hang Jebat. The scene is quite messy for drawing. On the right side is the long queue of people standing under the hot sun waiting for their turn to eat the famous chicken rice ball. On the left is a replica of some sail ship. 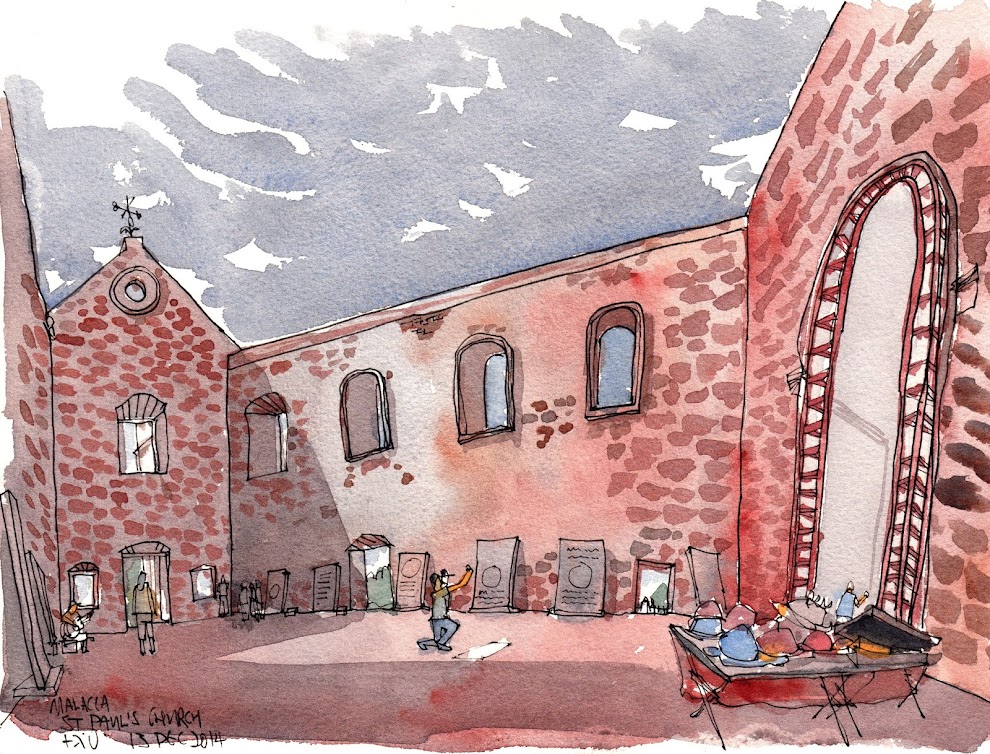 This is St Paul's Church, or more accurately the ruins of St Paul's Church. The roof's gone. The church was built in 1521. There are these huge tombstones laid against the sides of the walls. On the right corner is a stall selling souvenirs. Inside the sheltered area on the right, there's a vendor who told me he knew my friend Marvin Chew. What a small world. 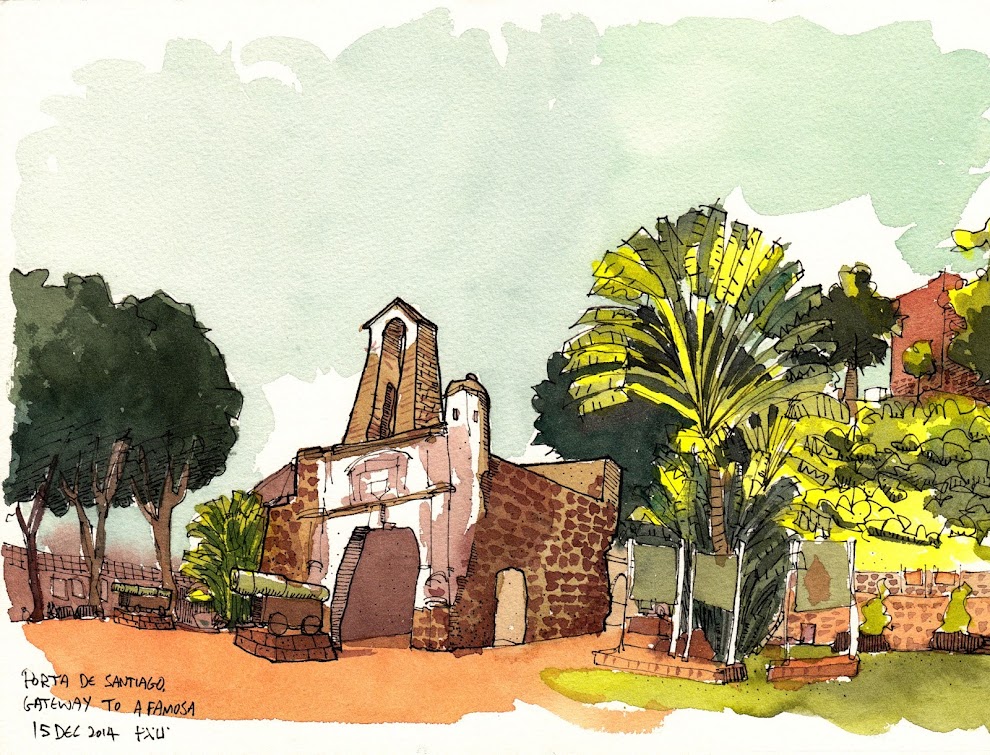 There are several Portuguese ruins in Malacca and the Porta de Santiago is one of them that's part of a fortress called A Famosa, "The Famous". This is the surviving gate for the fort. On the top right of the sketch, you can see St Paul's Church.

Most of the features and design on the front of the gate have already been worn out by the weather. It's interesting to see the odd shaped bricks that were used to build the gate. These bricks had many small holes in them.