Here's another review of the Duke 551 aka the Confucius Compound Art Fountain Pen. My friend Drewscape has reviewed this pen one year ago. I only bought one recently because of my current obsession with Fude nib pens. A Fude nib is a bent nib that's capable of creating strokes of varying thickness.

The Duke 551 can be considered the ultimate Fude nib pen as you shall see below. 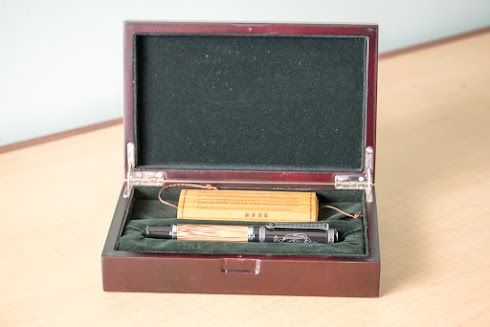 The pen comes in a beautiful wooden box. Inside the box it's all velvet. You just have the pen and a small wooden bamboo scroll inside. The pen converter is inside the pen.

In Drewscape's review, his box came with a bottle of ink and the layout of the box's interior is different. Mine came with that bamboo scroll instead. We bought from different buyers on Amazon.

This is the hinge of the box. I love the box. For a box set with pen that cost under USD $70, it's really value for money. I've since repurposed the box to hold my other drawing tools.

That's the small bamboo scroll with what I think is Confucius writing. The words are quite small. Nice to have but I would have preferred the ink bottle.

The cap has lots of design patterns, on top, on the clip and on the body of the cap and bottom around the circumference. It's a screw-on cap.

That's the drawing of the man himself, Confucius.

This is a big and heavy pen. It almost feels like holding a fat marker except it's heavier.

Here's the beautiful bamboo body of the pen.

That's the top and bottom of the body.

On top of the nib is an additional small piece of metal that's suppose to helps with the ink flow. A Sailor Emperor nib pen also has that sort of tab.

It's quite a big nib to start with and has a rather long bent section measuring 4mm. So you can create really broad strokes.

As the nib is so broad, in order to supply the large amount of ink required, the nib is cut with 3 tines (2 slits). This is something you might see in some music nibs, such as the Platinum music nib.

As you can see above, the ink reservoir tab on mine is not aligned perfectly with the tines. It works fine, but it doesn't not look as nice. Argh.

Here are the different parts. I'm not sure if the feed can be dismantled but I dare not try.

Interestingly, there's another version of the Duke 551 out there that uses a click-on instead of the screw-on cap.

The other pen (left) also has a different design on the pen cap. The drawing is roughly similar but if you notice, there are more details in the other pen where the man's sleeves are. The pen I have has a simpler design. I did not know that until I borrowed another pen from another friend Whee Teck.

In terms of writing performance, they both have the same nib.

Here are some sketches with the pen.

The strokes are very expressive compared to other pens I've used. The thin and extra thick lines creates the extra character to the lines.

Unfortunately for the pen I have, the ink would stop running after a while even though there's still ink in the converter. My friend Whee Teck's one works perfectly fine. So I've no idea what's wrong with mine, and it's a new pen.

When I shake it, the ink will start flowing again.

So that's the downside, the questionable quality in the feed system.

If you don't need the box, you can find the pen separately on eBay.