This is the Pentel Tradio Stylo Sketch Pen I bought recently. By the way, it's also called the Tradia Pulaman.

It's quite pricey for a sketching pen and I was apprehensive about buying it. One Tradio Stylo cost more than a box of 12 Sharpies. It's also much more expensive than the many Uniball pens I've featured so far.

Is it worth it? The short answer is no. Read on to find out why.

The Tradio Stylo is a felt tip pen that uses refill ink cartridges.

The ink cartridge is actually connected to the grip which makes sense because felt tip will get worn off with use and you'll want to replace that eventually. It holds quite a good amount of ink. When you cap the pen, there's a little section that shows you the ink level inside.

The felt tip has quite an unique design. The tip here looks like a big piece of triangle and held between two pieces of plastic.

You can draw at a rather low angle too which uses more of the side and you can get thicker lines.

The Tradio Stylo is a nice pen to sketch with but there are some quirks to take note of.

The felt tip has a very textural feel when drawing on paper. So it's definitely not as smooth as ballpoint, but it's not unexpected since it's felt tip.

The sketch above was drawn on a fine grain textured Schut Sketchpad 180gsm.

I've drawn some lines with the Sharpie Extra Fine for comparison.

Tradio Stylo has a more uniform stroke that does not thicken much towards the end. You can increase the thickness slightly by applying more pressure when drawing.

Sharpie lines tend to go thicker at the ends and have tendency to end with a blob.

When you lay both the tips of the Tradio Stylo on paper for a duration of time, an ink blob will form fast on lousy paper and slow on good paper.

You can write on normal 70-80gsm paper with the Tradio Stylo and it will not be bleed to the next page. 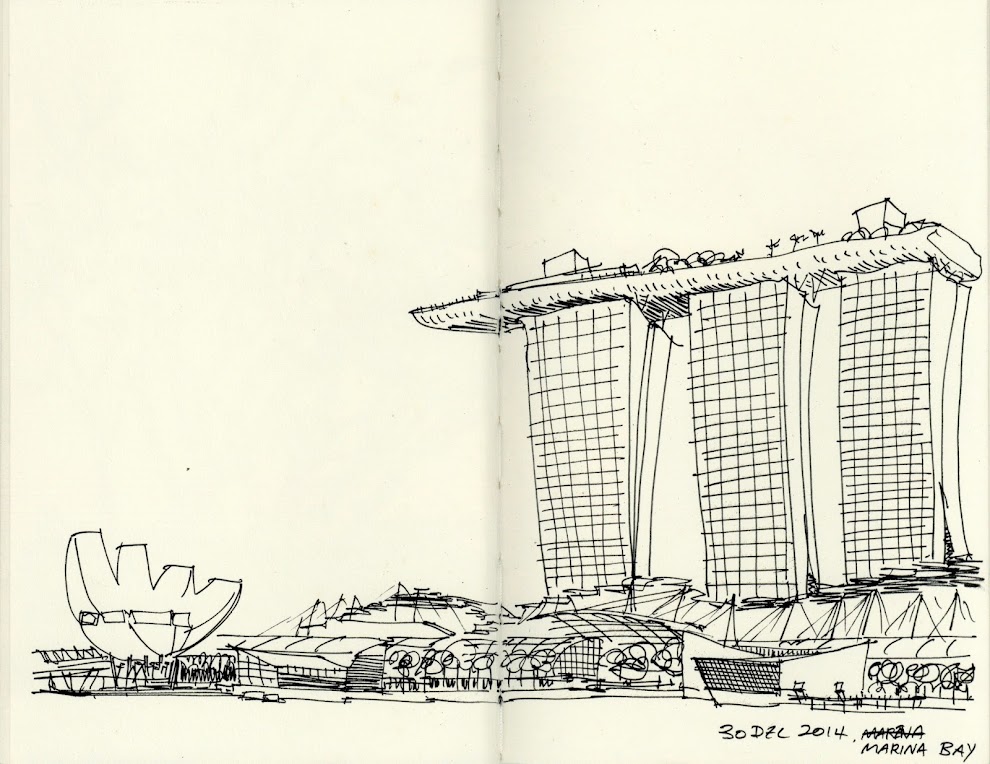 Here's a quick sketch I did on a Stillman & Birn Delta 270gsm sketchbook.

Here's a close up. For some reason, ink can spray from the felt tip in tiny amounts away from the stroke when you're drawing fast on textured paper. An unwanted effect, that's for sure.

It also happens on smoother paper but much less frequently. Look at the letter 'r' and you can spot the tiny dots of ink too. The ink spray is probably caused felt tip breaking free after being caught by the texture of the paper.

You can see the tiny ink dots on this quick doodle too. Generally speaking, if you draw fast, then be careful of the ink spraying effect.

The Tradio Stylo ink is intensely dark but unfortunately it is not waterproof.

Here I've layered coloured fountain pen ink onto the lines and the Tradio Stylo ink spreads too. So it's definitely not safe for use with other water-based mediums.

There's no problem with inking blacks with brush though, of course.

This is a sketching pen with quirks, specifically the ink spraying effect from the nib on rougher paper. Keep that in mind when using it.

I'll recommend it for just black and white line art, or for use with black ink washes. The ink is not waterproof so it limits the pen's use for mixed media work.

Overall, since it's quite a pricey pen so it's not really worth the money, especially when compared to other simpler sketching pens such as those from Uniball or even the multiliner pens from Copic or Rotring.

How do you replace the cartridge?

@Patrick Davis
You just pull out the cartridge and replace it. That cartridge is almost the whole pen actually, as shown in the photo above.

I'm a little confused. The pen retails at about $6. Has the price gone down or are Sharpies cheaper than I realized?

@Lev
This pen is expensive so I'm not surprised at the price. It's just not worth the money.