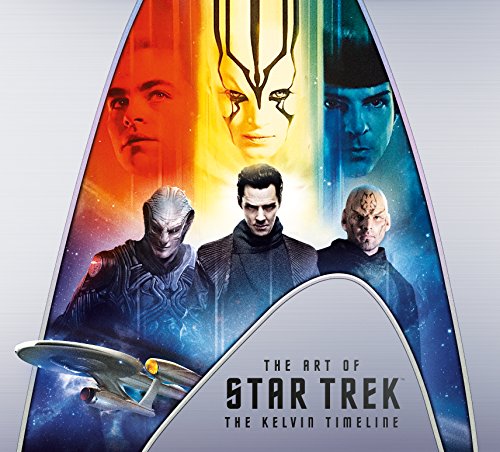 This book features the concept art from Star Trek (2009), Star Trek Into the Darkness (2013) and Star Trek Beyond (2016). It's great to have another Star Trek artbook but this feels a missed opportunity to produce something great.

The artbook released in 2009, Star Trek: The Art of the Film, was excellent because it has a lot of detailed artworks that covered all aspects of the film. This new 190-page hardcover instead provides a condensed offering of artworks and makes it look and feels lacking as a result.

Half of the book covers the first film. If you have the first book, you may see familiar artworks. But thankfully there are a lot of new artworks included as well. Looks like even as good as the first artbook was, there was also content held back.

The other half of the book is split between the second and third film. I've a feeling that a lot of content was held back too considered there was so much art created for the first film. Surely there must has been more artworks than to allocate a quarter of this book to the second and third film. And that's where I feel that this book is lacking. It could easily have been three hundred pages. But instead, we have a condensed version of what could have been.

As a standalone artbook, it's still a decent companion to the films. The artworks included are wonderful. They are mostly environment art, spaceships, interiors and some character designs. The artworks have lots of details that's worth the time to slowly admire. The interiors of the spaceships are so beautiful, and so are the landscapes of other planets.

This is a good book, but it could have been a great one.

no sure if the page count has anything to do with how much concept art was available. But if so I wonder if it's because they needed way more concept art to set the look for the first film. After that they knew where they were heading, so it just had to look right within that frame.

@Criz
It could be the case that you mentioned. But I guess we'll never know... until they release another artbook featuring previously unpublished artworks. LOL.