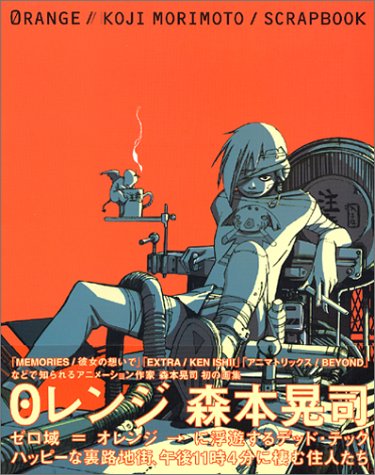 The dark orange cover caught my attention at the bookshop. I've no idea who Koji Morimoto is but his manga style is the kind I like. This is a paperback with dust jacket, originally published in 2004 and reprinted in 2009. The pages are thick and the book is large with 250 pages.

Koji Morimoto has worked for various television series and feature films, most notably he was the animation supervisor on AKIRA. He also wrote and directed the short Beyond from The Animatrix series. He's also one of the founders for the Japanese animation studio Studio 4°C.

0レンジ(オレンジ)~森本晃司作品集~ (Orange / Koji Morimoto / Scrapbook) is a collection of sketches mainly on character designs and strange urban settings. There are black and white line art, coloured illustrations and some photos. I'm don't know if any of these concepts are used in animation for I can't recognise any except for Saya from Blood: The Last Vampire (which is probably fan art).

There are plenty of great characters to look at, the different designs and costumes. The sketches are actually quite refined. Characters are well formed, silhouette is strong and distinct, as expected from an animator of such caliber.

Right at the end is an interview between Katsuhiro Otomo and Koji Morimoto. This book is in Japanese but has English translated text.